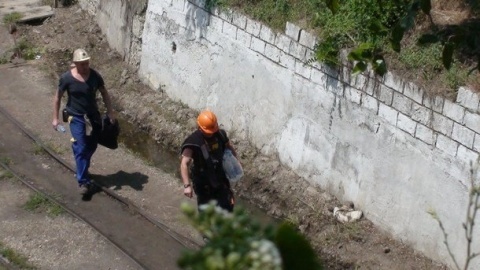 Rescue workers are still searching for two workers who were trapped after a coal mine collapsed near the town of Simitli in southwestern Bulgaria on July 16. Photo by BGNES

A new light earthquake has been registered in southwestern Bulgaria Sunday evening.

According to the European Seismology Center, the quake occurred at 8:30 pm. It had a magnitude of 2.8 points on the Richter scale at a debt of 2 km.

The epicenter is located 6 km northwest of the city of Blagoevgrad and 82 km south of the capital Sofia.

The shock came in the aftermath of a series of quakes in the area, registered in the wee hours Saturday, when the strongest one had a magnitude of 3.9 on the Richter scale.

The tremors were again felt in the town of Simitli and the nearby "Oranovo" coal mine, which collapsed on July 16.

The rescue effort was downgraded to search last Friday and is in its 14th day now. The teams have reached Sunday the 18th meter from the 33-meter long detour gallery. They advance by an average of 4 meters every 24 hours and it is expected that on Thursday they will reach the spot where the two are believed to be.

Experts say it will be a true miracle to find them alive, but close ones still believe in a happy outcome.

The earthquakes have not affected the works inside the mine where they were not felt as strongly as on the surface.