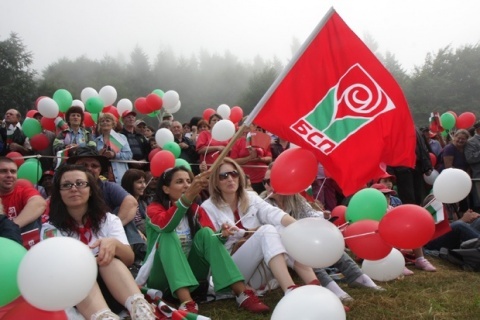 Thousands of Bulgarian Socialists are expected to gather at the 20th meeting, held at Mount in the Stara Planina range, to mark the 122nd anniversary of the Socialist Movement in Bulgaria. File photo by Sofia Photo Agency

Members and followers of the Bulgarian Socialist Party (BSP) are holding Saturday their traditional meeting at Mount Buzludzha under the motto "Bulgaria for the People".

Thousands of Bulgarian Socialists are expected to gather at the 20th meeting, held at Mount in the Stara Planina range, to mark the 122nd anniversary of the Socialist Movement in Bulgaria and the Day of BSP, August 2nd.

The official launch of Buzludzha 2013 is scheduled for 11:30 am. The leaders of BSP and all left-wing parties from Coalition for Bulgaria, the chairs of their youth organizations, the union of women Socialists and Socialist veterans will walks on the stage.

Prime Minister, Plamen Oresharski, though not officially member of BSP, will attend as well.

Young Socialists will be presented with their first party membership cards and welcomed into the inner circle of BSP. Stanishev will personally great many of them.

In continuing the tradition, awards will be bestowed by the Nikolay Dobrev Foundation for Young Politician 2013, and by the National Council of BSP for Best Political Journalist.

The youth branch of the party will fly 122 kites in the sky in Bulgaria's national flag colors – white, green and red.

In 1891 on Mount Buzludzha the foundations of the Socialist Movement in Bulgaria were laid. The monument erected at the site and unveiled in 1981 on the occasion of the 1300th anniversary of the founding of the Bulgarian State is shaped in the form of a UFO.

Meanwhile, other Bulgarians have been staging for 43 days now anti-government rallies with demands the Socialist-endorsed Cabinet resigns immediately.