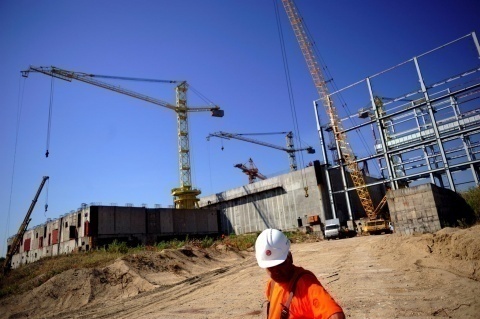 Bulgaria decided to abandon plans to build its second nuclear power plant in March 2012 after failing to agree on its cost with Russian company Atomstroyexport, a subsidiary of Rosatom, and find Western investors. Photo by EPA/BGNES

Bulgaria's Socialist-endorsed government has included in its plan a possible restart of the project to build a Russian-sponsored second nuclear power plant in the Danube town of Belene.

The information emerged from the draft program presented before representatives of the National Council of the left-wing Bulgarian Socialist Party, BSP, held on Friday, and reported by the Focus news agency.

The chapter "Rescue of Bulgarian Energy" includes the following text: "If the technical and economic characteristics of the project "Belene" become confirmed along with the forecasts for future use of electric energy in Bulgaria and the region, the project will be restarted with a clear financial structure."

The text further includes provisions for new negotiations with Russia's Rosatom to iron out problems related to the project.

As soon as he was sworn-in, Bulgaria's new Prime Minister Plamen Oresharski, elected on the Socialist mandate, hinted that the Belene NPP project may be revived.

The pro-Belene BSP then launched a petition for a referendum on the Russian-Bulgarian project. The referendum took place on January 27, 2013.

Discussions on the abandoned project were renewed when Rosatom subsidiary Atomstroyexport upped its claim against NEK to EUR 1 B, though Rosatom said it was open for an out-of-court settlement of the arbitration suit.

In the middle of July 2012, Russia's state nuclear company Atomstroyexport took Bulgaria's NEK to the arbitration court for EUR 58 M over delayed payments for its work on two nuclear reactors.

The next day the Bulgarian company said it was ready to strike back with a EUR 61 M counter claim against Atomstroyexport over delayed payments for purchases of old equipment for the plant, worth about EUR 300 M.

Atomstroyexport said it increased the claim to cover construction work and production costs of the two canceled nuclear reactors.

After selecting the Russian company Atomstroyexport to build a two 1000-MW reactors at Belene and signing a deal for the construction, allegedly for the price of EUR 3.997 B, with the Russians during Putin's visit to Sofia in January 2008, in September 2008, former Prime Minister Stanishev gave a formal restart of the building of Belene. At the end of 2008, German energy giant RWE was selected as a strategic foreign investor for the plant.

The Belene NPP has been de facto frozen since the fall of 2009 when RWE, which was supposed to provide EUR 2 B in exchange for a 49% stake, pulled out.

Shortly afterwards BNP Paribas SA, France's largest bank by market value, which was hired by the previous Socialist government to help fund the construction of Belene, ditched the project in February 2010.

NEK initially held a 51% stake in the scheme and PM, Boyko Borisov's Cabinet planned to cut its shares in the project to 20-30%, which will still allow the country to keep its blocking quota.

On January 27, 2013, Bulgarians had to answer in the referendum the following question: "Should nuclear energy be developed in Bulgaria through the construction of new nuclear power units?"

Under the law, the referendum results imposed for the Belene NPP to be put back on the Parliament's agenda, as voter turnout slightly exceeded 20%. 61% of the voters said "yes" to the construction of a new NPP; 39% cast a "no" ballot.