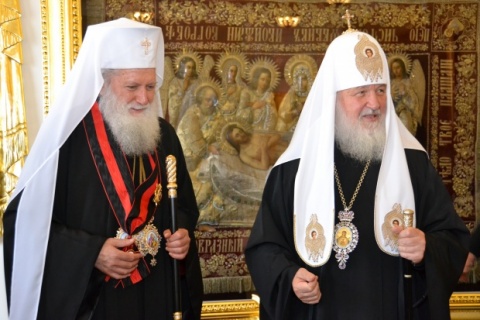 Patriarchs Neofit of Bulgaria (l) and Kiril of Russia have met in Moscow during Neofit's first official trip abroad. Photo by BGNES

The Patriarch is leading the Bulgarian delegation which is taking part in the celebrations of the 1025th anniversary of the converting of Russia to Christianity, the so-called "Baptism of Russia."

The delegation will be in Moscow until July 30. The invitation was extended by the Moscow Patriarchy.

The two Patriarchs first visited the chapel in the Synod's headquarters in Moscow and then held a talk.

Kiril thanked Neofit for arriving for the important for the Russian Orthodox Church celebrations, stressing the latter were emblematic for the unity of the Christian Orthodox as representatives of all Orthodox Churches are in attendance.

Neofit voiced gratitude for the hospitality and the opportunity Kiril extended to him to place the laying stone of the new temple St Kyprianos.

The two joined around the idea that the common heroic history of their churches was the ground for the current effort to maintain their unity and the unity of the people of Bulgaria and Russia. Kiril praised Bulgaria's effort in this direction.

Other important issues discussed by the Patriarchs include increasing the number of pilgrimage trips to and from both countries; increasing the number of exchange theology students; the effort to introduce religion as a school subject in Bulgaria; the current state of society and its morals, and the problems Christians face in the Middle East, among others.

Patriarch Neofit has also signed a document for the latter's support, which will be sent to all Christian Orthodox Patriarchs, to Russian President, Vladimir Putin, and to the EU and US Leaders.

Kiril bestowed to Neofit the Knyaz Vladimir First Degree Order for his contributions to the Orthodox Church.

This is the first official visit abroad of the Bulgarian Patriarch.

During the visit, he will also meet with the Presidents of Russia, Vladimir Putin, and of the Ukraine, Viktor Yanukovych. Neofit will take part in the liturgy in the "Christ the Savior" church in the Russian capital and in the following reception.

The Bulgarian Patriarch will participate in a solemn liturgy and prayer in Kiev.

After Patriarch Maxim passed away in November 2012, on February 24, 2013, Ruse Metropolitan Neofit was elected Patriarch of the Bulgarian Orthodox Church by the Holy Synod's national church council.