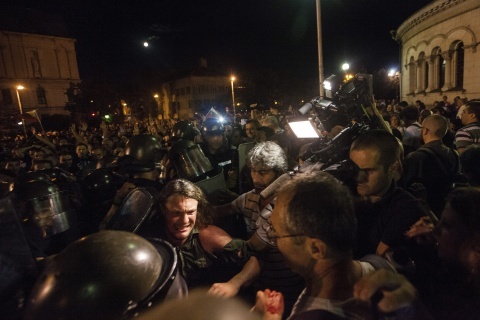 Violent clashes between riot police and anti-government protesters occurred for the first time on the 40th day of rallies in Bulgaria. Photo by BGNES

The Bulgarian Prosecutor's Office has made a decision to launch a probe in alleged police brutality during the Tuesday evening anti-government rally in the capital Sofia.

The announcement was made Thursday by Chief Prosecutor, Sotir Tsatsarov, who explained the grounds for the investigation were TV footage, aired Tuesday evening into Wednesday, documenting clashes between riot police and anti-government protesters.

The probe is for work-related crimes and inflicting bodily harm while on duty.

"We are also seeking those among the crowd of demonstrators who might have provoked the violence, but the TV broadcast was alarming regarding the action of some police officers," says Tsatsarov.

He, however, stressed the majority of the police deserve a sincere "thank you" as they behaved in a great professional manner in preserving maximum cool and composure.

"The regular policemen and women are not to blame for the decision of their superiors," Tsatsarov explained.

Interior Minister, Tsvetlin Yovchev, already stated he was assuming full responsibility for the Tuesday night developments, but the Chief Prosecutor voiced an opinion Thursday that the orders have been given by a police chief at the scene. He promised the prosecution would identify this individual.

For the first time since the rallies started on June 14, Tsatsarov was met with applause by demonstrators when he was leaving the headquarters of the Supreme Judicial Council, VSS, in downtown Sofia.

Late Tuesday evening, anti-government protesters sat on the pavement and erected barricades near the Parliament to prevent lawmakers and ministers discussing in 3 committees the budget update from leaving the building. Media reporters inside also ended up being under siege.

In the ensuing clashes, 18 people – demonstrators and 5 police officers were injured, but none seriously.

Thursday marks day 42 in Bulgaria of protests against the Socialists-endorsed Cabinet of Prime Minister, Plamen Oresharski.

The morning protest will merge with the traditional afternoon rally starting 6.30 pm in front of the Council of Ministers building.

After the clashes Tuesday, the rally on day 41st (Wednesday) was once again peaceful.