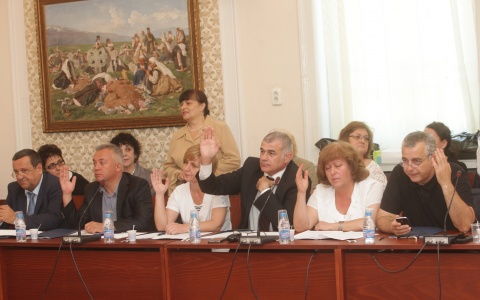 The three parliamentary committees exchanged views on the budget actualization project approved at an extraordinary government sitting on Monday. Photo by BGNES

Bulgaria's parliamentary committees on budget and finance and social and economic policy adopted the government's proposal for a budget revision at a joint sitting on Tuesday.

The budget update is to pass first reading in Parliament on Thursday, according to reports of Sega daily.

During the discussion of the changes to Budget 2013, the Parliament building was besieged by anti-government protesters chanting "resign" and booing intensely.

The three parliamentary committees exchanged views on the budget actualization project approved at an extraordinary government sitting on Monday.

The joint sitting of the three committees was attended by representatives of center-right party GERB, who appeared only as "guests" and were not entitled to vote.

Shortly after Monday's government sitting, GERB leader and former Prime Minister Boyko Borisov vowed that GERB MPs would return to Parliament for the vote on the budget actualization because they believed that it would be a catastrophe for the state.

After the inaugural sitting of Bulgaria's 42nd National Assembly on May 21, Boyko Borisov, former Prime Minister and leader of GERB, declared that the party would boycott parliament sittings by non-attendance and refusal to register for voting until the Parliament was ready to discuss Election Code amendments and new early elections were scheduled.

In a Monday statement, Borisov argued that the discussion on the budget was much more important than Election Code amendments, adding that the MPs of GERB would try to dissuade their colleagues from approving a loan of up to BGN 1 B and to win them over in favor of a BGN 150 M package of measures earmarked for the most vulnerable social groups.