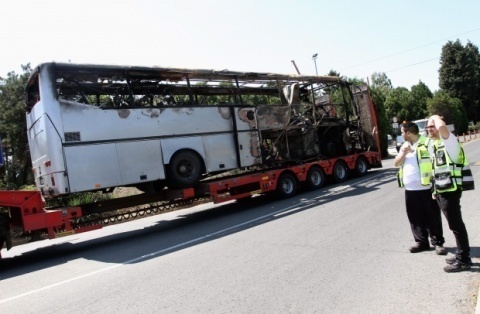 The EU Foreign Affairs Council is discussing Monday proposals to sanction the military wing of Hezbollah.

Two previous attempts to blacklist Hezbollah misfired because a unanimous vote of all 28 member states is required.

The meeting of the EU Ambassadors last Thursday ended without consensus and the ball was passed to the EU Foreign Affairs Ministers.

According to unnamed sources, they will debate visa restrictions for individuals who are suspected in terrorism and asset freeze for certain organizations. They add the Monday decision will be political, while concrete sanctions and their enforcement will take more time.

The grounds for the possible joint opinion on Hezbollah are the prevented terror attack in Cyprus and the one in Bulgaria's Burgas one year ago.

The same source has also said that EU humanitarian aid for Lebanon over the Syrian refugee crisis will remain in place and despite more and more EU Member States joining around the decision to blacklist Hezbolla's military wing, the common desire is to keep political dialogue with Lebanon and all its political parties.

He has noted that there is no legal definition of "military wing of Hezbollah," thus the EU was seeking ways to apply the said sanctions.

Another diplomat, citied by France Press, informs that Ireland and Malta continue to oppose adding Hezbollah to the list of designated terror organizations, but Austria has lifted its veto under the pressure of Great Britain, France and the Netherlands.

The position of the Czech Republic and Slovakia remains unknown, however, the common opinion of sources speaking off-the-record is that EU Member States are getting closer to consensus.

Bulgaria marked last Thursday the one year anniversary of the terror act in Burgas.

On July 18, 2012, a bus bombing at the Sarafovo airport of the Black Sea city of Burgas killed six Israeli tourists, their Bulgarian bus driver, Mustafa Kiosov, and the bomber.

A pregnant woman was among the fatalities. 35 people sustained injuries.

The officials have said Britain, France, and the United States are pressing several EU countries that are reluctant to back such a move.

In February 2013, Bulgaria's then-Interior Minister Tsvetan Tsvetanov in the Cabinet of the Citizens for European Development of Bulgaria party, GERB, suggested that the evidence collected by the investigating authorities led to a "reasonable assumption" about the involvement of the Lebanese militant group in last year's terror attack at the Burgas airport.

Bulgaria's new Foreign Minister in the Socialist-endorsed government, Kristian Vigenin, recently refuted reports that the country was trying to shift blame for the Burgas terror attack from Hezbollah.

Vigenin said on June 5 that "the evidence is not categorical" that Hezbollah planned the attack. International media then commented that the Balkan country had "backed away from charges" that the Shi'ite Muslim militant group had carried out the attack.

International media then commented that the Balkan country had "backed away from charges" that the Shi'ite Muslim militant group had carried out the attack.

Announcing plans for reforms in the security sector at the beginning of June, current Interior Minister Tsvetlin Yovchev Yovchev and Chief Secretary Svetlozar Lazarov made clear the stance of the Ministry on the terror attack.

"There is no change in the Bulgarian stance on the act of terror in Sarafovo. My expert opinion, as I am acquainted with the conclusions and the facts, gathered up to now in the investigation, is that the announced stance of my colleagues is right and I support it," the Interior Minister stated.

On Thursday, July 18, Bulgaria held a solemn ceremony at Sarafovo. The memorial in homage to the victims was officially inaugurated as well.

The investigation of the terror attack is still ongoing.

It was reported that with the help of Europol three of the four suspects have been identified. They entered Bulgaria two and a half weeks before the incident with fake ID documents.

The initial lead that the attack was perpetrated by a suicide bomber was replaced by one that he was blown remotely. The explosives have been in his backpack and he might have been unaware of the sinister plan.