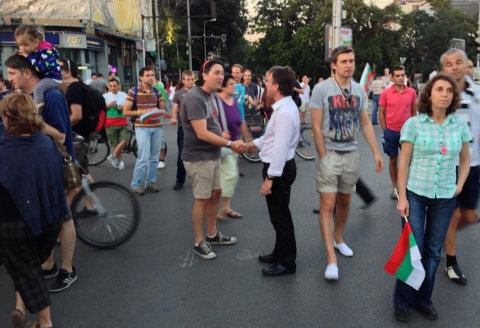 The Ambassador of France in Sofia, Philippe Autie, talks to protesting Bulgarians on Eagles' Bridge. Photo by Ivo Bozkov for OFFNews

The Ambassador of France to Bulgaria, Philippe Autie, has visited Wednesday evening the anti-government protest rally.

The diplomat joined the demonstrators at the Eagles' Bridge intersection and talked to some of them as thousands of people took to the streets of the capital Sofia for the 34th evening in a row.

Last week the French and German Ambassadors in Sofia issued a joint statement, insisting the voice of the people to be heard and Bulgaria to part with the oligarchic model of ruling the country.

In reaction to the positions of the diplomats, Foreign Minister, Kristian Vigenin and Plamen Oresharski, Prime Minister in the Socialist-endorsed Cabinet, said they pertained to former governments.

The leader of the Bulgarian extremist nationalist Ataka party, Volen Siderov, demanded from Vigenin to take actions against foreign diplomats in the country.

Meanwhile, the procession of protesters went for several evenings to the French and German Embassies in Sofia to express their gratitude to the Ambassadors.

As Bulgaria marks Thursday the 176th anniversary since the birth of national hero and Apostle of Freedom, Vasil Levski, there are calls for more radical demonstrations and blockades of the Parliament and nearby streets.

The series of the peaceful, but mass and persisting anti-government protests in Bulgaria was triggered by the scandalous appointment of media mogul Delyan Peevski as Chair of the State Agency for National Security (DANS).