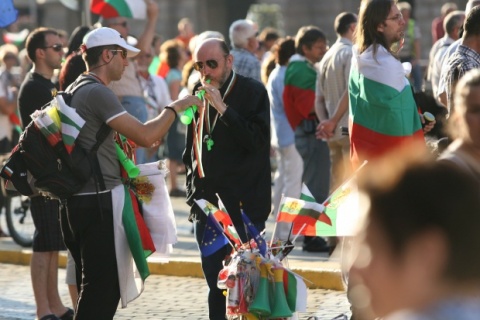 Bulgarian anti-government demonstrators are trying to form Thursday morning a human chain around the Parliament in Sofia. Photo by BGNES

Bulgarians are staging once again Thursday the now-traditional coffee-drinking anti-government rally in front of the Parliament building in downtown Sofia.

Scores of people, mainly youth, though people from all ages are seen, have already have gathered near the adjacent to the Parliament "Alexander Nevsky" cathedral.

Some sat in the middle of "Oborishte" street, blocking traffic as there was an idea among social networks users to barricade nearby streets. Riot police asked them to move and dispersed them, but they have returned and the blockade is now a fact.

Another group has gathered on the square in front of the Parliament. People are blowing whistles and waving national flags. The traditional bike procession has arrived as well. The stands offering free coffee are opened.

bTV reports that the crowd is much larger, compared to recent days. Demonstrators are holding hands, trying to make a human chain. There is large riot police presence with many streets closed for traffic and pedestrians.

The rally is joined by a bus of protesters from the southwestern city of Blagoevgrad, who are demonstrating against the appointment of Musa Palev from the predominantly ethnic Turkish party Movement for Rights and Freedoms, DPS, for Regional Governor.

Meanwhile, organizers and participants have called on social networks for turning the coffee-drinking rally into a "striking protest." The plan is for the human chain to occupy all entrances of the Parliament to prevent MPs from beginning work. Protesters are asked to continue the blockade through the entire day until the start of the evening rally.

Organizers are also inviting people from all over the country to rise in their support. They remind that Thursday marks the 176th anniversary since the birth of Bulgaria's national hero and Apostle of Freedom, Vasil Levski.

Three quotes from Levski are distributed among the protesters: "We need actions, not words," "Everything depends on our common effort," and "Brotherhood for everyone, regardless of religion and nationality."

Some of the participants write on Facebook that the "striking protest" might turn violent, while others plan to bring their children as they have done it every day.

Those attending the evening rally are also asked to wear white clothes as a symbol of Levski's dream for "pure and sacred republic."

The Thursday morning protest is to merge once again with the traditional afternoon rally, the 35th in a row, starting 6:30 pm on Independence square in front of the Council of Ministers building.

Although the appointment was revoked, the people went on to demand that the Socialist-endorsed cabinet of Prime Minister, Plamen Oresharski, resign collectively over ties with oligarchs.