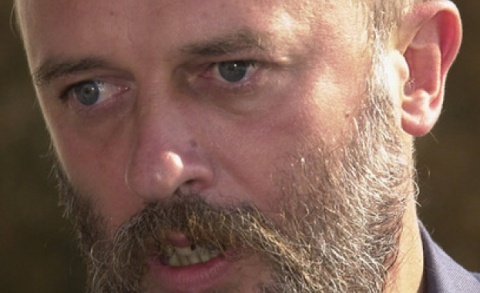 The hunger strike, during which Sugarev was only drinking water, is not the first protest of this kind for him. In 1993 he went on a hunger strike against then-President Zhelyo Zhelev, stirring controversy among right-wingers. Photo by BGNES

Edvin Sugarev, a prominent Bulgarian poet, who has been on a hunger strike against the country’s Socialist-led government for twenty two days, will be delivered nutrition directly into the bloodstream on Thursday.

This was announced by his wife, doctor Maria Arsenieva, on Wednesday afternoon, hours after Sugarev’s condition rapidly deteriorated and he was rushed into hospital.

Sugarev was admitted to Alexandrovska hospital’s intensive care unit earlier on Wednesday. The 59-year-old poet has been on a hunger strike for 22 days now.

“I was the one who forced him to enter the hospital and put an end to the hunger strike. He vehemently opposed at the beginning, he wanted to persevere. We spoke all night, he was throwing up all night and in the morning his condition became so poor, he was rushed into the hospital,” his wife shared on Wednesday.

Four of the poet’s children declared on Wednesday that they are joining his hunger strike, but Sugarev has vehemently opposed to that after hearing the news from his wife, she said.

As he started his protest Sugarev said he was ready to starve to death in his protest.

The hunger strike, during which Sugarev was only drinking water, is not the first protest of this kind for him. In 1993 he went on a hunger strike against then-President Zhelyo Zhelev, stirring controversy among right-wingers.

"Go in peace, Mr. Prime Minister! For a 12th consecutive day, thousands of Bulgarians have demanded your resignation, and you keep pretending you are not hearing their voices coming from below the windows of your office, that you do not understand their demands, and you cannot feel their insistence," Sugarev declared in an open letter to the media.

Sugarev accused Oresherski of pursuing opaque policies and of manipulating people into thinking that Bulgaria will descend into chaos if the government was ousted.

He drew attention to the ties of the Oresharski cabinet with oligarchs, comparing the current government to the government headed by the deceased Professor Lyuben Berov.

He went on to list all of Oresharski's inadequate appointments, including that of notorious media tycoon Delyan Peevski as head of the State Agency for National Security, DANS, that of Ivan Ivanov, whose ties with the organized criminal group SIC were exposed last week, as Deputy Interior Minister, and Foreign Minister Kristiyan Vigenin, who vowed to reinstate former collaborators of the communist-era State Security (DS) at diplomatic posts.