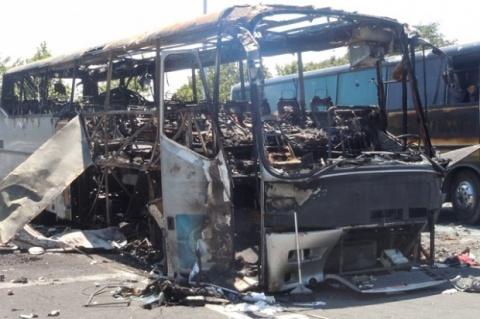 Bulgaria has announced increased security measures at bus stations, airports and hotels in the eve of the one year anniversary of the terror act in Burgas.

July 18 will mark one year since the bus bombing at the Sarafovo airport of the Black Sea city of Burgas that killed six Israeli tourists, their Bulgarian bus driver, Mustafa Kiosov, and the bomber.

The Chair of the Bulgarian Association of Tour Operators and Travel Agents, Irina Naydenova, reported Wednesday that at bus stations all luggage will be placed in luggage compartments only after a thorough check including lists to verify the owners of any single piece. This will ensure loading only bags and suitcases of persons who are actually going to be on the bus as passengers.

Naydenova further informs that additional staff will monitor the loading and the people getting on the bus.

All Bulgaria airports are also under increased security measures with additional agents in new configuration and tightened access regime.

In addition, hotel owners have undertaken measures to not allow suspicious packages and individuals near or inside the premises, says the Chairman of the Bulgarian Hotel and Restaurant Owners Association, Blagoy Ragin.

They, however, complain the police have failed to act and there is a shortage of policemen at Bulgaria's largest summer resort, "Sunny Beach" near Burgas, forcing them to hire and pay for private security guards.

They say the above is putting a dent in their planned budget.