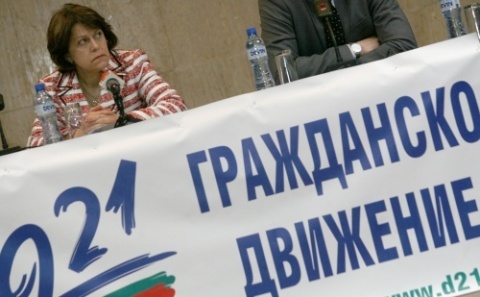 A new left-wing party is going to appear on Bulgaria's political horizon by the fall, according to Tatyana Doncheva, former leading Socialist, who started a new civic movement in 2010.

Doncheva, leader of the left-wing movement 21, explained in an interview for the Bulgarian National Television Tuesday that the new party she was planning to found has the goal to unite people with left-wing ideology against the oligarchic model of ruling the country.

"We want to end our relations with the current leadership and politics of the Bulgarian Socialist party, BSP, as they don't represent the views of people with leftist orientation. We want to take care of those from the left wing, who don't want to be linked to the oligarchy. The organization tasks will conclude in September-October and we will launch the party then," said Doncheva.

The former BSP Member of the Parliament forecasted a dark future in isolation for the party's current leadership, and particularly for its chairman, Sergey Stanishev.

She commented that Socialists now had two options – replace Stanishev and all high-level functionaries or form a new party, stressing the first was impossible as Stanishev was ready to pay any price to hold on to power.

Doncheva further blasted them for their attitude of disdain towards Bulgarians who have been protesting for over a month now against the Socialist-endorsed cabinet of Prime Minister, Plamen Oresharski, with demands for its resignation.

"I spent my life attempting to change the left wing. We need a new party," she concluded.