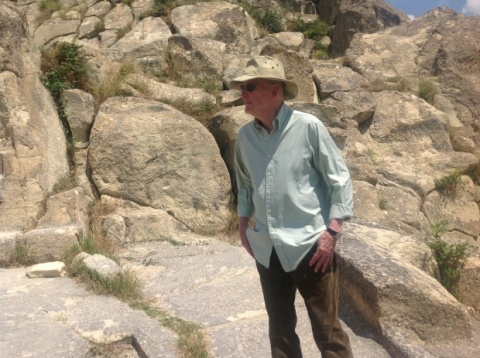 Simeon Saxe-Coburg during a recent trip to archaeological sites in central Bulgaria. Photo by BGNES

Simeon Saxe-Coburg-Gotha, once Bulgaria's monarch and recently the country's PM, is well under way in writing his memoirs, it was revealed Monday.

"The manuscript is in a very advanced phase, but has no title yet. The book will not be strictly autobiographical," revealed Simeon as reported by the Standart daily.

The book is expected to include interesting details from recent political life in Bulgaria, including Saxe-Coburg's interaction with political leaders such as Ahmed Dogan, Sergey Stanishev and Boyko Borisov.

But it is also expected to feature the former tsar's encounters with influential international politicians and business people during the time of his exile from Bulgaria by the communist regime.

The former Bulgarian PM also revealed he has been for years working on the book, using his rich personal archives.

Born in 1937, Simeon Saxe-Coburg was enthroned, under a regency, as Bulgaria's tsar following the untimely death of his father Boris III in 1943.

In 1946 he was formally deposed by the communist regime and had to flee the country with hisfamily.

Simeon re-entered Bulgarian politics with a blast in 2001, founding the liberal National Movement for Stability and Prosperity, which decisively won general elections that year.

Following elections in 2005, NMSP was a partner in a tripartite coalition cabinet (2005-9) with the Bulgarian Socialist Party and the Movement for Rights and Freedoms.

Simeon was not part of the new cabinet chaired by socialist leader Sergey Stanishev, but continued to exert influence over Bulgarian politics via an informal "coalition council" consisting of him, Stanishev and tehn MRF leader Ahmed Dogan.

The political carreer of former Bulgarian PM Boyko Borisov (2009-13) was launched by Simeon, when Borisov was appointed Chief Secretary of Bulgaria's Ministry of Interior in the Saxe-Coburg cabinet.