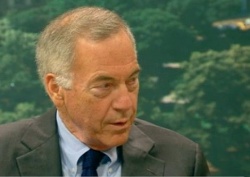 Professor Steve Hanke is in Bulgaria to be awarded the honorary title of Doctor Honoris Causa by the Bulgarian Academy of Sciences, BAS. Photo by bTV

Johns Hopkins economist Steve Hanke, who designed the currency board in Bulgaria in the 1990s, has called for shrinking the government as a way to fight corruption.

“The main thing that has to be done is to shrink the government. The source of the corruption is ultimately facilitated by the government,” Steve Hanke told the morning broadcast of private TV channel bTV on Monday.

Asked about the mass protests against the government that have been going on for a month already, Hanke said:

In Hanke’s words the new wave of Bulgarian immigrants will be a catastrophe for the country.

“International investors who may want to come to Bulgaria are very skeptical because they worry about corruption.”

According to Hanke Bulgaria may use Singapore’s experience how to deal with the crisis.

"The prime minister of Singapore assembled a group of 12 experts and their task was to see how to use the crisis as an opportunity. In January 2010, less than a year after their first meeting, the experts delivered a report, recommending that they focus on high added value goods and services. The government took the experts’ advice. Besides now they have a very small and simple government.”

Hanke pointed out that Singapore’s success has a lot to do with corruption or in fact the lack of it.

Bulgaria was completely bankrupt by the end of 1996 and had hyper-inflation that peaked with a monthly inflation rate of 242%, in February 1997, wiping out the banks and the country.

Steve Hanke was President Stoyanov's adviser at the time and they installed the so called Currency Board, absolutely rigid and solid banking regulations, which are counter-cyclical and mean that in the good times you are putting a lot aside.

Hanke has recommended for months that Sofia stay out of the euro and has recently took a firmer than ever stance.

Every lev in circulation has since been backed 100% by foreign exchange reserves at the national bank—first the mark, and since 1999 the euro. This arrangement is known as a currency board and is much stronger than a mere currency peg.

That's because in principle under a currency board the central bank could meet any speculative attack on the lev by accepting levs in exchange for the euros the bank holds in reserve.