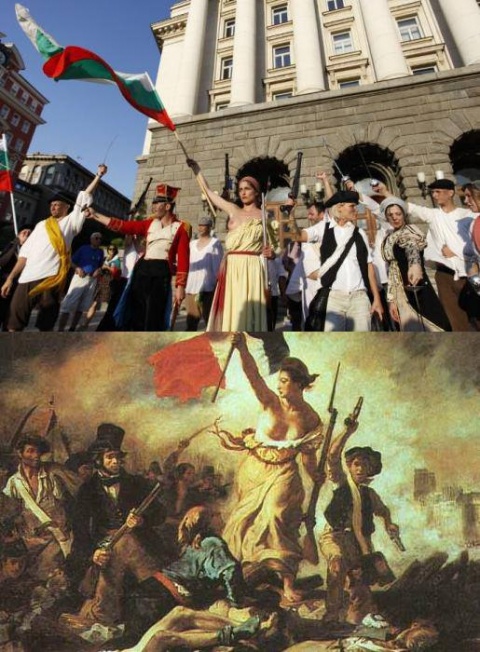 A group of protesting Bulgarians has staged Saturday evening a reincarnation of Eugene Delacroix's historic painting of the July Revolution in France - Liberty Leading the People.

The performance was both homage to the French people celebrating Bastille Day on July 14 and a show of respect for the position of the French and German Ambassadors, who issued a joint statement recently, insisting the voice of the people to be heard and Bulgaria to part with the oligarchic model of ruling the country.

Bulgarian model and actress, Tanya Ilieva, portrayed the French Liberty on the 30th day of protests. She is best known by her leading female role in the movie Dzift of acclaimed Bulgarian director, Yavor Gardev.

Thousands gathered once again on Independence square in downtown Sofia to demand the resignation of the Socialist-endorsed government of Prime Minister Plamen Oresharski.

This time around, Liberty led the procession on a different route, so that it could stop in front of the French Embassy and give it a thundering round of applause.

Sunday is the 31st day of protests in Bulgaria.

The series of anti-government protests was triggered by the scandalous appointment of controversial media mogul Delyan Peevski as Chair of the State Agency for National Security (DANS).

A much smaller rally in support of the cabinet Oresharski is held every evening as well in the park of the National Palace of Culture.

Bastille Day is celebrated on July 14 each year. It is called Fete Nationale (National Holiday) in France. It commemorates the 1790 Fete de la Federation, held on the first anniversary of the storming of the Bastille on July 14 1789. The Fete de la Federation was seen as a symbol of the uprising of the modern French "nation," and of the reconciliation of all the French inside the constitutional monarchy which preceded the First Republic, during the French Revolution.

Bastille Day became an official celebration in 1880. On May 21 1880, Benjamin Raspail presented a law proposal to have "the Republic choose  July 14 as a yearly national holiday". The law was made official on July 6 1880.

The day officially celebrates the 1790 Fete de la Federation, though it is often associated, even in France, with the Storming of the Bastille.