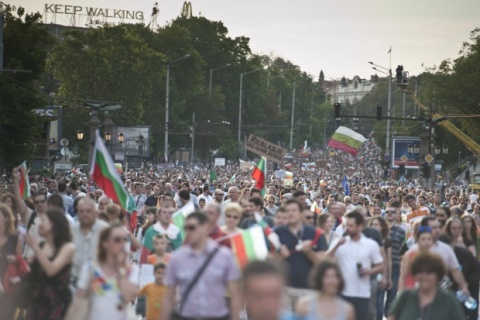 Bulgarian demonstrators have once again poured onto the streets of the capital to demand an overhaul of the country’s “corrupt” political system.

On Thursday evening, thousands of anti-government protesters gathered in front of the parliament in downtown Sofia chanting “mafia,” “resignation,” “go away with peace.”

The demonstrators clashed with riot police on several occasions as they decided to change tactics and blockade the building of the parliament.

Up to 10,000 protesters, protestors have been demonstrating in the capital Sofia every evening since June 14, calling on the Prime Minister Plamen Oresharski to step down.

Analysts believe new elections -- by mid-2014 at the latest -- are the only solution out of the crisis, but Oresharski has repeatedly refused to resign, claiming that fresh election would only destabilize the country and devastate the ailing economy of the European Union's poorest country.

On Friday, Oresharski told parliament he was listening to the demonstrator, and that his administration had taken measures to ease poverty and unemployment and boost economic recovery.

Viktoria Katova, a 24-year-old protestor said at a rally “Things can't get any worse. I'd rather go for 10 snap elections in a row than put up with this corrupt, insolent political class that pretends it does not notice us”.

Another 55-year-old protester, physical education teacher Nikolay Staykov, said, “This isn't democracy. Bulgaria has been parceled out to different business circles... what we have here is a state mafia.”

“All the parties are the same... We must wipe all that out and build the political system up from scratch,” he said, adding that new elections were “an absolute necessity.”

Oresharski has said the appointment was a mistake, but that his government will not resign over it.

Shortly after the appointment, President Rosen Plevneliev said he had lost confidence in the government and demanded an immediate review of the controversial appointment.

The appointment was controversial since Peevski runs one of the country's major media groups and has no experience in national security.

In February, the country’s previous conservative-led government was forced to resign after massive protests were held against high-energy bills and low salaries in the poorest EU member state.