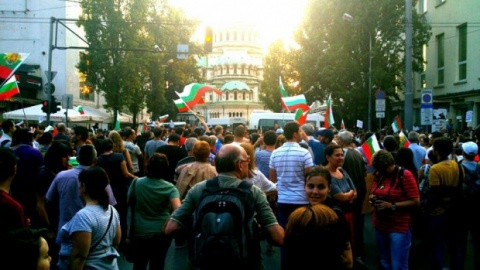 Friday is the 29th day of anti-government protests in Bulgaria. Photo by BGNES

The first clashes and escalation of tensions occurred on the evening of the 28th day of Bulgaria's protest rallies against the Socialist-endorsed government of Prime Minister, Plamen Oresharski.

As the demonstrators decided to change tactics and blockade the building of the Parliament, they clashed with riot police on several occasions. They were also surprised by the expansion of the security zone there. There was no violence, however, and the tensions were limited to pushing and attempts to remove the metal fences.

According to the Interior Ministry, 3 000 protesters were on Independence Square in downtown Sofia at the beginning of the rally at 8 pm. The crowd visibly grew during the march which this time around moved from there to the building of the Parliament.

People shouted once again "mafia," "resignation," "go away with peace," held banners and national flags, while some performed music and danced.

One demonstrator reminded that according to the Meetings and Demonstrations Act, the security zone is between 5 and 20 meters from any particular building.

At the monument, people sang the national anthem and shouted "resignation" again and again. After an unsuccessful attempt to enter "Moscow" street, they split in two - one group returned to the building of the Council of Ministries and the other to the Parliament. Mocking signs reading Lumpenstrasse were placed on the metal fences near the government headquarters.

At the Parliament, some tried to push the fences away, but fresh police forces arrived and stopped them. Others threw tomatoes at the building.

About 2 000 remained there shouting "resignation," while a group left for the Eagles' Bridge intersection. Two people have been detained for disorderly conduct.

Rallies were held in the cities of Plovdiv, Burgas, Sliven, Blagoevgrad, and Yambol among others.

Friday is the 29th day of protests in Bulgaria.

The now-traditional "coffee drinking" rally is held in front of the Parliament in the morning.

Downtown Sofia remains under a true blockade with all streets leading to the Parliament sealed off by the police. Security measures and police presence in the area are upped to the maximum. Metal fences reach all the way to the Alexander Nevsky cathedral.

The morning protest is to merge with the traditional afternoon rally, the 29th in a row, starting 6.30 pm in front of the Council of Ministers building.