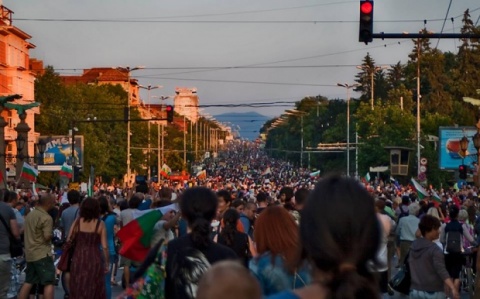 Dozens of thousands have protested against Bulgaria's Socialist-led government for 26 days now. Photo by Facebook

KNSB, a major Bulgarian trade union, has called for early elections amid mass anti-government protests in the country.

Despite declaring that an early vote is the only way out of the political crisis, KNSB has noted that it should only take place once “a number of laws are passed” by the current Parliament.

KNSB has urged both parliamentary and extra-parliamentary parties to reach consensus, taking into consideration the voice of civil society.

The trade union believes that Parliament should update the current state budget and pass the budget for 2014, as well as amend the Electoral Code.

KNSB believes the lawmakers should be ready with all amendments by the end of 2013, during which time a working government should be in place.

On Sunday, the other big trade union in Bulgaria, Podkrepa, urged President Rosen Plevneliev to convene a Grand National Assembly in reaction to the escalating tensions in the country.

The current government took office after a snap election in May, but mass protests, calling for its resignation erupted in mid-June over the controversial appointment of a media mogul, Delyan Peevski, as head of the national security agency.

Prime Minister Plamen Oresharski, who heads a Socialist-led coalition, later revoked the appointment and apologized, but mass protests against his coalition government have continued for 27 days now, attracting dozens of thousands of people.