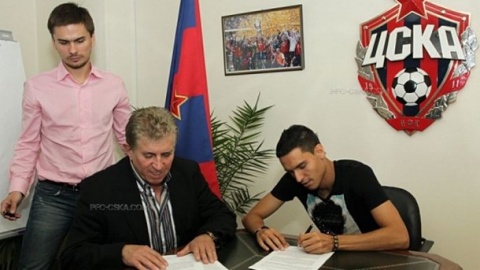 Bulgaria midfielder Georgi Milanov, who signed a five-year contract with CSKA Moscow last week, is expected to make his debut with the Russian champions on Monday.

His first clash as part of the Moscow-based club will be against Volga.

The former Litex Lovech star, who became the country’s youngest footballer of the year 2012, passed a medical test in Munich last Wednesday, the last step before signing the contract with the Moscow club.

Media reports say that the Russian champions will fork out to Litex Lovech between EUR 2.75 M – EUR 3.75 M for the 21-year-old midfielder Georgi Milanov, depending on his performance.

Litex had reportedly put a EUR 4 M price tag on its most valuable player.

Spanish club Sevilla was also said to be interested in signing one of the hottest prospects of Bulgarian football, as well as CSKA Sofia but only if former Litex Lovech owner Grisha Ganchev had taken over the club.