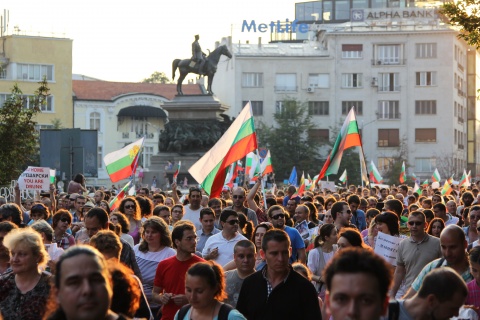 Mass protests, calling for the resignation of Bulgaria’s new Socialist-led government, erupted in mid-June, over a series of controversial appointments. Photo by Dimiter Muftieff

One of the two biggest trade unions in Bulgaria has urged the president to convene a Grand National Assembly in reaction to the escalating tensions in the country.

“Bulgaria needs to urgently re-write the rules, which define the state governs. Otherwise, if he 42nd National Assembly failed to provide a reasonable solution, we will stage a national strike to protect the interests of our members and fellow citizens,” the trade union “Podkrepa” said in a statement, circulated to the media.

The news comes days after Bulgaria's president Rosen Plevneliev said on Friday that another early election should take place to deal with daily anti-government street protests.

Bulgaria has been in political turmoil for months.

The current government took office after a snap election in May, but mass protests, calling for its resignation erupted in mid-June over the controversial appointment of a media mogul, Delyan Peevski, as head of the national security agency.

Prime Minister Plamen Oresharski, who heads a Socialist-led coalition, later revoked the appointment and apologized, but protests against his coalition government continued.