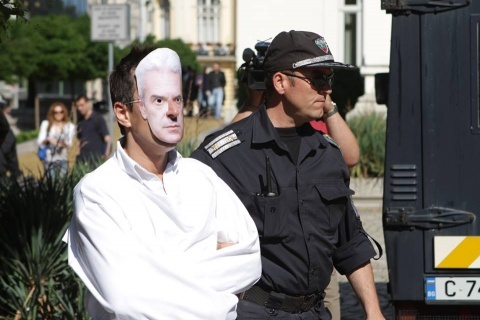 The arrogance of the nationalist party, combined with the corruption and cronyism in government have turned Bulgaria into the bad apple of the European bloc, an active protester and journalist says.

“Bulgarian politicians thought that they have to be held responsible for their actions by voters only once every four years. But accountability is a daily activity. That’s the reason why we take to the streets every day,” journalist Nayo Titzin told the state-owned radio on Sunday.

He forecast that the protests will continue undeterred and are already scoring their successes.

Titzin made headlines on Wednesday morning after police arrested him for entering the security zone around the Parliament wearing a straitjacket and a mask of nationalist leader, Volen Siderov.

The journalist was part of the group of Bulgarians protesting for the sixth morning in a row by staging a coffee-drinking anti-government rally in front of the Parliament building in downtown Sofia.

Titzin was able to enter the security zone by showing a journalist accreditation card, but was arrested later when he put on the mask. When seeing the arrest, the other demonstrators started shouting "Let him go!" and "Arrest the Real One!"

The journalist was taken to the booth at the back entrance of the Parliament and was held there for a while before being released. The people in the area greeted him with thundering applause.

He told media and demonstrators that the police questioned him and issued a citation for him for hiding his identity under a mask and a warning to observe public order. They told him he was not going to be arrested.

Titzin thanked the media and the police for the friendly and composed attitude. He explained the police acted adequately as he was inside the security zone wearing a mask.

The journalist stressed the goal of his "performance" has been reached – to have pictures and footage of the police arresting the leader of the extremist nationalist party Ataka, Volen Siderov, with a straitjacket near the Parliament entrance.

Titzin is one of most active participants in the protests, documenting the events with photographs and videos. He was wearing Siderov's mask for the second time, but he did not enter the security zone before.

Titzin demonstrated Wednesday with his two daughters, who waited for him to complete the action.

Downtown Sofia was under a true blockade with all streets leading to the Parliament sealed off by the police.

Thousands came to the rally with national flags, megaphones, whistles, and banners, shouting once again demands for the government's resignation.

Huge traffic jams were reported. The Members of the Parliament, however, continued their session unperturbed.