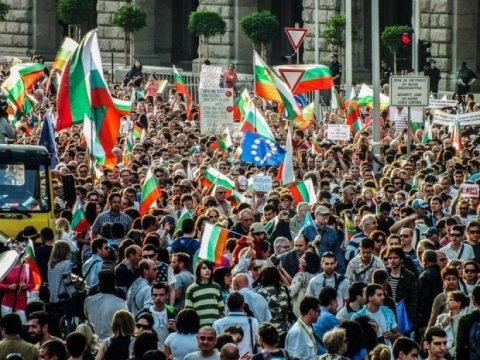 The rallies over the last few days against Bulgaria's Socialist-endorsed government of Plamen Oresharski, were one of the largest ones held in the capital Sofia in the last 15 years. Photo by BGNES

For the twenty-fourth day in a row, thousands of protesters are to take to the streets in Sofia on Sunday evening, demanding the resignation of Bulgaria's socialist-led government.

Meanwhile, a counter-protest in support of the Cabinet, headed by Plamen Oresharski, will be held in the evening in the park near the National Palace of Culture in Sofia, but as usually is expected to have much lower attendance.

The rallies over the last few days against Bulgaria's Socialist-endorsed government of Plamen Oresharski, were one of the largest ones held in the capital Sofia in the last 15 years.

Over 25 000 gathered Wednesday evening in front of the Council of Ministers in downtown Sofia to request the resignation of the Cabinet Oresharski.

There is a new trend noticed in the last few days with the attendance of the rallies growing after a slowdown at the end of last week and the weekend, attributed mostly to inclement weather.

It took the procession over 40 minutes to pass through the main pedestrian Vitosha Boulevard.

When people were still marching there, the first ranks reached the building of the Parliament.

There were no reported incidents.

The protests are expected to continue on Monday morning with the morning coffee-drinking anti-government rally in front of the Parliament building.

The series of anti-government protests in Bulgaria was triggered by the scandalous appointment of controversial media mogul Delyan Peevski as Chair of the State Agency for National Security (DANS).