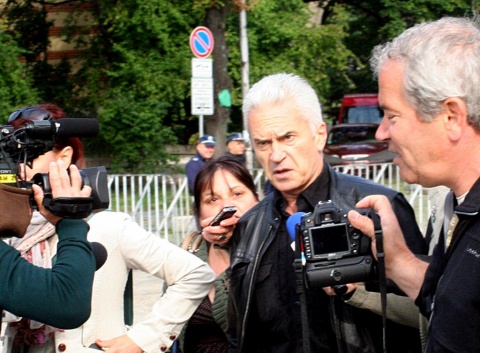 An angry Volen Siderov facing off journalists in Burgas. TV grab from SKAT.

Recordings have surfaced of a new physical face off between MPs from controversial Bulgarian nationalist party Ataka and journalists trying to inteview them.

The incident is reported to have occured at a gas station in the major city of Burgas, and involved Ataka MPs Denitsa Gadzheva and Kalina Balabanova pitted against SKAT TV reporters.

Present at the site were also fellow MPs Desislav Chukolov and party leader Volen Siderov, who has of late assumed a highly erratic posture, verbally or physically attacking journalists and MPs from other parties.

The four Ataka MPs later staged a impromptu event in front of the SKAT office in Burgas.

Saturday SKAT TV released videos of the two incidents, which were published by OffNews.bg HERE.

In the first years after Ataka's founding in 2005, SKAT was a highly friendly media outlet, promoting the new party and its leader.

However, later Siderov fell off with SKAT owner Valeri Simeonov, who went on to found the rival nationalist party National Front for the Salvation of Bulgaria.

At May 12 general elections, the National Front scored right after Ataka's 7% of the vote, almost passing the 4% election hurdle.