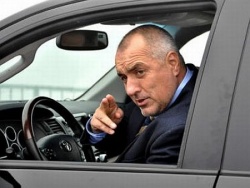 The former PM once again expressed sympathy with the rallies, saying the cabinet of PM Plamen Oresharski, recently elected on the mandate of the Bulgarian Socialist Party, should go out.

However, Borisov was not so optimistic about plans for a new rightist party, which started to emerge as a response of demands by protesters.

"[Former PM and rightist leader] Ivan Kostov thinks that he can turn his 3% support to 33%. He did much to bring the Socialists to power, so that he can now revive his righitst project," said Borisov.

Until recently, Kostov was leader of the Democrats for Strong Bulgaria party, which failed to make it past the election hurdle at the May 12 snap vote.

On his part, Borisov is leader of rightist GERB party, which has the largest group in Parliament, but is isolated by other parties.

According to Borisov, not only Kostov, but also controversial Corporate Commercial Bank owner Tsvetan Vasilev is sponsoring the new rightist project.

"Ties between Vasilev and Kostov are friendly and stem from many years ago," commented the GERB leader.

According to Borisov, Vasilev has found a way to profit from the ongoing political crisis in Bulgaria.

The mass anti-government protests started June 14, upon the appointment of MP Delyan Peevski for head of Bulgaria's State Agency for National Security (DANS).

Although Peevski stepped down the day after, what angered Bulgarians was the brazen appointment of a controversial media mogul, known to be a protege of banker Vasilev, to a position of such import.

The Corporate Commercial Bank became notorious for financing Peevski's influential New Bulgarian Media Group, and for mysteriously being the bank where deposits of Bulgarian state companies are most concentrated.

Talks for the new rightist project include Democrats for Strong Bulgaria, the Bulgaria for Citizens party founded by ex EU commissioner Meglena Kuneva, the Bulgarian Greens, and rightists from Blue Unity.