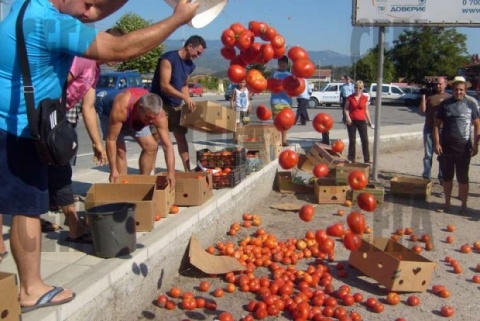 Bulgarian produce growers issued a warning Friday with threats of civil arrest and blockades of the main E-79 road to the Greek border.

The blockade will happen near the southern resort town of Sandanski.

Farmers from the northern region of the Danube city of Ruse are also planning protests. Vegetable growers from the northwestern Bulgarian city of Vidin and the nearby villages plan to block Danube Bridge 2 unless the authorities take steps to curb illegal imports.

Produce growers are outraged by dumping prices of Bulgarian produce on the local market and lack of regulations in the import of fruits and vegetables from neighboring countries, which poses huge hurdles to the sale of the Bulgarian-grown ones.

Bulgarian farmers, predominantly from the region of Petrich and Sandanski in Bulgaria's Blagoevgrad region, have already staged protests demonstratively littering the main E-79 road with their produce.

They have sent a protest declaration to the Agriculture Ministry, the Parliament, the President, and MEPs, and insist on meeting with them.

Meanwhile, Deputy Agriculture Minister, Yavor Gechev, announced that inspections of border crossing points and big wholesale fruit and vegetable markets in the country, carried out by the National Revenue Agency, the Customs Agency and the Food Safety Agency, have led to the increase of wholesale prices of locally-grown tomatoes by BGN 0.2 to BGN 0.4 per kg.

He promised additional funds for farmers from the State budget, but warned this is not an easy task.

Gechev pointed on the need of more and better advertisement so that people choose to purchase local farming products.

Meanwhile, Bulgaria's National Association of Tobacco Growers announced that it was also gearing up for protests scheduled to take place on July 11 in Sofia and at three border crossing points.

Industry representatives complained that the government had failed to protect the interests of tobacco growers as regards EU subsidies.

Representatives of the National Association of Tobacco Growers are to meet with Svetla Bachvarova, Chair of the Parliament's agriculture committee, to discuss the matter.