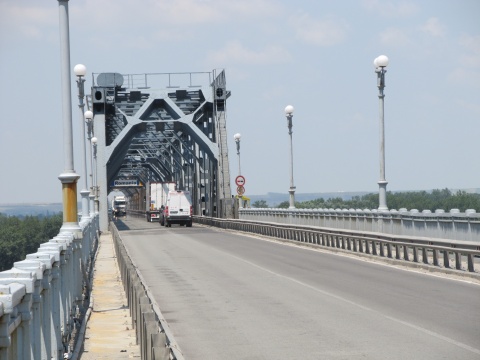 Representatives of the road agencies of Bulgaria and Romania discussed the possibility of carrying out a simultaneous overhaul of Danube Bridge 1 in 2014 at a recent working meeting in the Danube city of Ruse.

Mincho Minchev, head of the Ruse-based unit of Bulgaria's Road Infrastructure Agency, announced that that it was universally agreed that Danube Brudge 1 needed a thorough rehabilitation due to the intensive heavy-freight traffic and its long exploitation period of around 60 years.

Minchev, as cited by the Bgnes new agency, informed that Romania had suggested in 2012 to start repair works in 2013 as it had secured the funding for the Romanian project.

"Danube Bridge 2 had not yet been launched in mid-May 2013 and the repair works had to be postponed by a year due to the lack of an alternative route. We also have a project for the overall rehabilitation of the Bulgarian section. The project will be updated and we shall do our best to carry out repair works simultaneously with the Romanians so that the temporary traffic organization will apply to the two regions at the same time," he explained.

The repair works at the Romanian section of Danube Bridge 1 are expected to cost around EUR 10 M, but the overhaul of the Bulgarian stretch is expected to cost less because the two sections have different total lengths.

The issue of repairing Danube Bridge 1 returned to the agenda after a pothole opened up in the bridge in the spring of 2013.

Emergency repair works were conducted to guarantee the normal exploitation of the facility and the safety of traffic.

"Potholes opening up is nothing new, this has been happening for years on end in the Romanian section of the facility, but thanks the better maintenance of the Bulgarian section made it possible for the first flaw to appear as late as now," Minchev emphasized.