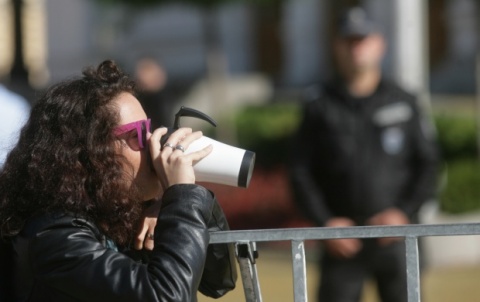 A coffee-drinking anti-government rally is taking place Thursday for the 7th consecutive time in front of the Parliament building in downtown Sofia. Photo by BGNES

Bulgarians are protesting Thursday for the seventh morning in a row by staging a coffee-drinking anti-government rally in front of the Parliament building in downtown Sofia.

There are stands offering free coffee to demonstrators. The plastic cups are being collected carefully before being sent for recycling not only to keep the area litter-free, but to be counted to estimate the number of participants.

Downtown Sofia is under a true blockade with all streets leading to the Parliament sealed off by the police. Security measures and police presence in the area are upped to the maximum. Metal fences reach all the way to the Alexander Nevsky cathedral.

Only parliamentary reporters are allowed inside the security zone after a thorough ID and accreditation check. Journalists working on reporting the protests are to stay with the demonstrators.

The increased police presence comes in the aftermath of the brief detention of journalist Nayo Titzin.

Meanwhile, the organizers of the rallies are calling on social networks for blockades of 10 key intersections in downtown Sofia during rush hour.

They also ask for a minute of silence for a policeman who has died Wednesday morning.

Some of those attending the morning coffee-drinking protest have stopped inside the Nevsky cathedral to light a candle in his memory.

The initial group of 20 people is growing. Hundreds are holding national flags, megaphones, whistles, and banners, shouting once again demands for the government's resignation.

Huge traffic jams have been reported. The Members of the Parliament, however, continue their session unperturbed.

The morning protest is to merge with the traditional afternoon rally, the 21st in a row, starting 6.30 pm in front of the Council of Ministers building.