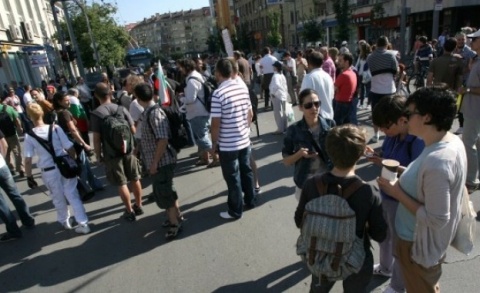 Bulgarians are protesting Thursday for the 21st day in a row, demanding that the cabinet resign collectively. Photo by BGNES

One policeman has died amidst mass anti-government protest rallies in the Bulgarian capital Sofia.

The Sofia Directorate of the Interior Ministry, SDVR, have confirmed he was working during the demonstrations, but it is yet unknown if he was on duty when he passed away.

His name, age, and exact tasks during the protests remain unknown as well.

According to initial information the cause of death was heart attack, but police say final conclusions, including finding out if the fatality was related to work overload and pressure during the rallies, are pending.

Bulgarians on social networks are calling for a minute of silence in his honor.

Meanwhile, the police syndicates raise alarm because police officers have been working for 20 days now without a break with workdays lasting 12-16 hours. All overtime standards have been exceeded while it is unclear if there are enough funds for compensations.

Blagoy Vankin from the Interior Ministry's syndicate says his colleagues are demotivated over the above, but also because of the 3-year salary freeze, leading to existence below the poverty line for 4-member families of police officers.

The SDVR Chief, Ivaylo Spiridonov, said before bTV that the work overload and pressure are extreme considering the rallies with blockades of key roads and intersections, along with the high crime rate in the capital Sofia.

He denied reports that police officers have been ordered to not apply any force against the protesters, stressing road blockades are not a crime, but a violation, where police are attempting to peacefully remove people and free traffic.

Bulgarians are protesting Thursday for the 21st day in a row.