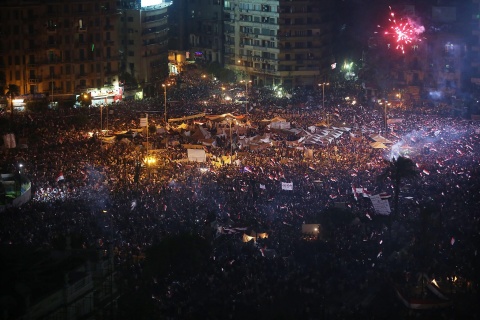 Egypt's constitution is suspended, and Mohammed Morsi is no longer the president of the country, after an official address by Egypt army chief General Abdel Fattah Al-Sisi.

Al-Sisi gave the address live on TV Wednesday night, and news were greeted by displays of joy at Cairo's Tahrir square and other hotspots of protests accross the country.

Earlier, there were reports that the army is to unveil a road plan for a road map of transition for the country.

Mohammed Morsi has issued a counter-statement, calling what is happening an "illegal military coup."

His position was echoed in a statement by the Muslim Brotherhood, the organization he was a leader in before becoming president.

On his part, Gen Al-Sisi stated that he army could not but heed to the demands of millions of Egyptians who took to the streets to protest against what they see as a wrong pro-Islamist direction in which Morsi is taking the country.

According to the army's proposal, Constitutional Court president Maher El-Beheiry will act as temporary head of state for Egypt.

The road map also stipulated that after "a short interim period," new parliamentary and presidential elections are to take place.

According to Egyptian media reports that are yet not confirmed, Morsi is currently being held under army arrest.

The heady development comes in the wake of an ultimatum issued by the army for the political crisis in the country to be resolved by Wednesday.

In the past weeks, millions have been ralliying in cities across the country against Morsi's rule, in what some have called the most numberous protests in human history.

On his part, Morsi issued a defiant statement Tuesday night, saying he is the legitimately elected president of Egypt.