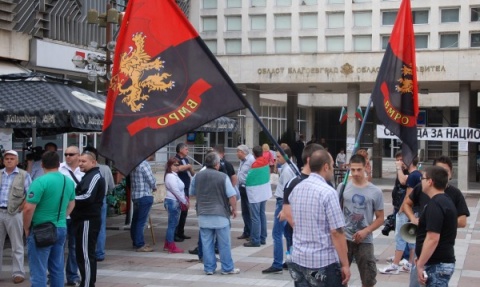 The protests in Bulgaria's Blagoevgrad against the new ethnic Turkish Regional Governor are organized by the nationalist VMRO party. Photo by Bulfoto

Although smaller in size, the protest in front of the District Administration in Bulgaria's southwestern city of Blagoevgrad continued on Tuesday.

The protesters oppose the appointment of Musa Palev from the predominantly ethnic Turkish party Movement for Rights and Freedom, DPS, for Regional Governor.

Members of the nationalist party Internal Macedonian Revolutionary Organization, VMRO-Blagoevgrad say they have prepared documentation concerning the work of the governor, which they intended to present at meetings with representatives of diplomatic missions in Sofia.

Representatives of VMRO vowed that they will flow to the protest against the government in Sofia on Wednesday.

So far, nearly 5 000 signatures for Palev's resignation have been collected from residents of Blagoevgrad and the area.

Protests against the appointment of Palev have been taking places since his first work day on June 17.

Protesters agreed that having a DPS representative for a governor of Blagoevgrad was unacceptable.

The southwestern resort town of Sandanski is organizing Monday its first own protest against the appointment.

Palev was firm he was not going to resign as people had nothing against him, except his ethnicity.