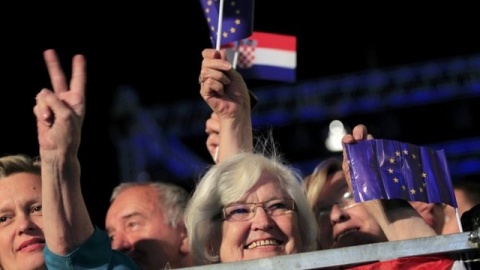 Croatia is the first new member of the European Union club since Bulgaria and Romania joined in 2007. Photo by BBC

Croatia has become the 28th member of the European Union, with crowds joining celebrations in the capital Zagreb.

Fireworks lit the sky as membership became effective at midnight (22:00 GMT), with President Ivo Josipovic describing the event as historic.

Celebrations took place in the central square of Zagreb, with fireworks and music including Beethoven's Ode to Joy, the European anthem.

President Josipovic said it was "a great and joyful day for our homeland".

"This the day when we open a new chapter in the thick book of our history," he added.

Earlier he told a meeting of EU and regional leaders: "The accession of Croatia to the European Union is confirmation that each one of us belongs to the European democratic and cultural set of values."

Croatia is the first new member of the European Union club since Bulgaria and Romania joined in 2007.

But correspondents say enthusiasm for the EU in the country has been dampened by the eurozone crisis, and Croatia's own economic problems