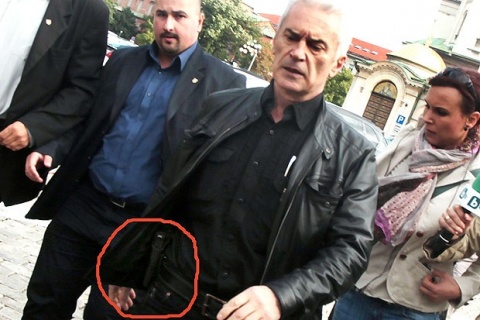 Reporters noticed earlier on Friday that Siderov was carrying what appeared to be a gun on his way to Parliament. Photo by Sofia Photo Agency

"Why are the people behaving like hooligans outside not arrested?" the ultranationalist leader asked in Parliament.

Bulgaria has seen fifteen days of massive anti-government rallies, with no clashes occurring between protesters and police.

An investigative report of the Bulgarian National Television recently exposed the extremist nationalist party in paying people to stage the counter-rallies in front of its headquarters.

On Friday, Siderov renewed his criticism of the Bulgarian National Television and several other TV channels, whom he believes are taking part in a "coup d'etat".

He reiterated his warning that a "civil war" may erupt if "certain measures" are not taken by the government.

Reporters noticed earlier on Friday that Siderov was carrying what appeared to be a gun on his way to Parliament.

Friday is the 15th consecutive day of massive peaceful protests in the country and a new large rally is to start at 6:30 pm.

The peaceful anti-government demonstrations in Bulgaria were triggered by the appointment of notorious media mogul Delyan Peevski as Chair of the State Agency for National Security (DANS).

The decision was eventually reversed, yet protesters went on to demand the resignation of the socialist-led government over ties with oligarchs, an end to opaque policies, and Election Code amendments aimed at guaranteeing a greater representation of Bulgarian citizens in the government.