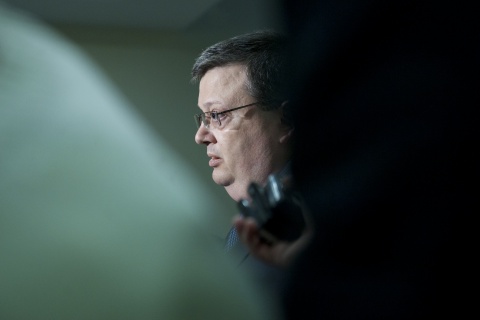 Bulgaria's Chief Prosecutor Sotir Tsatsarov is to request Parliament to lift the lawmaker immunity of Shteryo Sterev, MP of the ethnic Turkish Movement for Rights and Freedoms, DPS, party.

Tsatsarov, as cited by the Focus news agency, made clear that he would ask Parliament to lift Shterev's immunity from prosecution at the beginning of next week.

He made clear that Sterev was being investigated for money laundering and financial crime.

Shterev, in turn, vowed to give up his immunity if requested to do so and insisted that he was innocent.

He explained that he had been the subject of pre-trial proceedings for money laundering and document forgery in 2008 but specified that he had had not been summoned for a questioning since then.

Shterev emphasized that the parliamentary group of DPS was well aware of the pre-trial proceedings against him.

In his Thursday statement, Tsatsarov also made clear that the prosecution authority was going to file an indictment against former Interior Minister Tsvetan Tsvetanov over his refusal to grant a permit for the deployment of special surveillance equipment against the head of Veliko Tarnovo regional unit of the Interior Ministry's Chief Directorate "Combating Organized Crime" (GDBOP), Orlin Todorov, in 20 days' time.