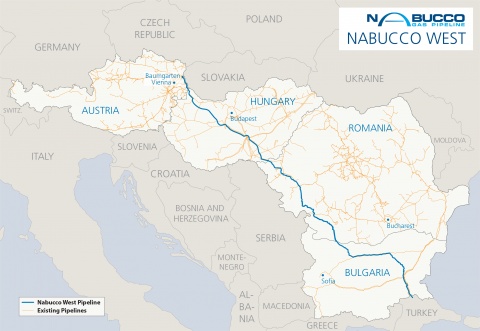 An offical map showing the projected route of Nabucco West. Image by Nabucco/EPA/BGNES

The Shah Deniz II consortium has suggested that it has chosen not to use Nabucco West for the transportation of natural gas from Azerbaijan's most promising field to Europe.

If this decision is formally confirmed and carried out, it will cast significant doubt over the protracted Nabucco project, designed to build a pipeline to transport Azeri gas to Europe.

The Shah Deniz consortium had to decide between Nabucco West and the Trans-Adriatic Pipeline (TAP).

The Nabucco project would have shipped Azeri gas from Turkey through Bulgaria, Romania, Hungary on to Austria, which has made Bulgaria a country highly committed to it.

On the other hand, TAP would transport natural gas directly westwards through Greece, Albania on to southern Italy.

The Shah Deniz consortium has informed Greek PM Antonis Samaras, as well as Nabucco shareholder OMV of its intention to choose TAP.

Shah Deniz II is operated by BP, together with Statoil, SOCAR, Total, Lukoil, NIOC and TPAO.