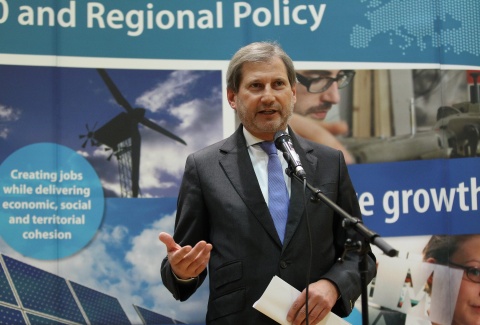 EU Commissioner for Regional Policy, Johannes Hahn, speaks during a press conference after a meeting with Capital city mayors at the EU Commisison headquarters in Brussels, Belgium, 28 February 2013. Photo by EPA/BGNES

"I would like to declare adamantly that I have never met this person [Petar Kirov]," Hahn said in a statement sent to the Bulgarian Telegraph Agency, BTA, by his Spokesperson Shirin Weeler, according to reports of the BGNES news agency.

The statement reads that Hahn has no influence on national political appointments and demands an instant apology from Transport Minister Papazov, given that the media cited him correctly, saying that the European Commissioner has recommended Petar Kirov for the post of deputy- transport minister.

"I would like to declare, in the strongest terms possible, that I have never met this person. I have no impact on national political appointments and I have never attempted to exert such influence. If Transport Minister Papazov was cited correctly, I expect an immediate apology," Hahn stated.

A number of news websites and Bulgarian daily Standard reported Monday that Papazov had announced in Burgas that Deputy Transport Minister Petar Kirov had been personally recommended by EU Commissioner Hahn.

Transport sector associations threatened Monday to stage road blocks to protest Kirov's appointment, stressing that he had been working in the maritime administration of the Transport Ministry since 2002 but had no experience in the sphere of auto transport.

Papazov, however, noted that Kirov's main responsibilities would involve Operational Program "Transport", not the automobile sector.

The opponents also claimed there was a case of conflict of interest as Petar Kirov was the son of Volodya Kirov, former director of the Executive Agency "Automobile Administration", and current head of a hazardous materials transportation training center within the system of the Transport Ministry.

"I am not interested in who his father is. I learned that he had once been head of the Executive Agency "Automobile Administration", but this does not matter. The man is fluent in English, he has all the necessary certificates and a personal recommendation from Commissioner Hahn," Papazov said on Monday.