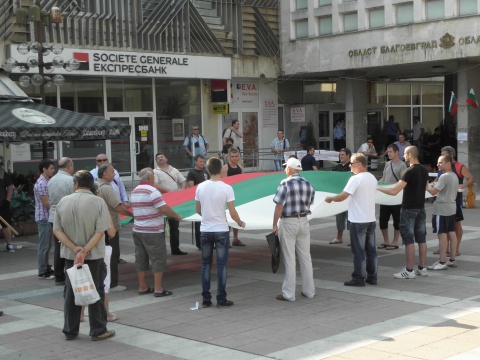 Blagoevgrad residents opposed to Palev's appointment have been staging protests for over a week. Photo by BGNES

Blagoevgrad residents opposed to Palev's appointment gathered Monday morning for yet another rally in front of the District Governor's office, according to reports of the Focus news agency and the Bulgarian Telegraph Agency (BTA).

"Today is an important day for Pirin Macedonia and Bulgaria, today is Holy Spirit - the day commemorating the fallen fighters for the freedom of Macedonia. 101 years after the liberation of the Pirin part of Macedonia from Turkish yoke we are witnessing events which are definitely not normal," said Georgi Vasev, a member of the governing body of Bulgarian nationalist party VMRO-BND and municipal councilor in Blagoevgrad.

He informed that VMRO kept collecting signatures of the people in the streets to petition against the appointment of Palev as District Governor of Blagoevgrad.

Angel Dzhambazki, Deputy Chair of VMRO-BND, made clear that the rallies would continue, with plans to block the road near the mountain resort of Bansko at noon on Wednesday.

"Road blocks will be staged every week in the following order: the Ilinden and Kulata border crossing points, main road E-79 near Sandaski, Simitli and Strumlyani, until this person understands that he is not wanted," Dzhambazki said.

Dzhambaski commented that ethnic Turks Movements for Rights and Freedoms, DPS, was to blame for inciting ethnic tensions in the Blagoevgrad district, through its "arrogant and insolent appointment" of Palev and through its attempt to gain control over the administrative and political power in a region plagued by the ongoing enterprises of radical Islamism.

He informed that VMRO would submit a tip-off with the prosecuting authority concerning media statements of Palev inciting ethnic tensions and religious hatred.

The protest in Blagoevgrad is to continue later on Monday.

Meanwhile, the demonstrations against the appointment of Ventsislav Kaimakanov as District Governor of Plovdiv also continued on Monday.

Around 20 protesters gathered in front of the district administration's office Monday morning.

Kaimakanov went out to speak with the demonstrators, but faced booing and "Resign!" chants.

He tried to convince the disgruntled citizens that he had not been appointed on the mandate of DPS and blamed Georgi Gergov, leader of the Plovdiv unit of the Bulgarian Socialist Party of concocting the rumor.