Bulgaria’s Protests May Bring Back Borisov, Topple Him Again - Kostov 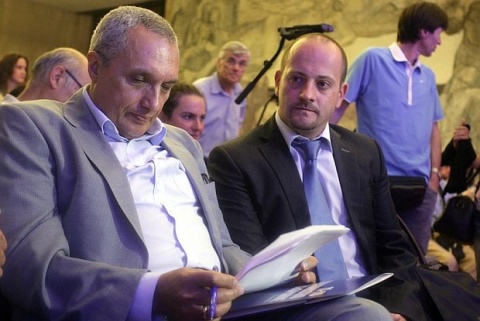 Ivan Kostova (R) is pictured here with his successor Radan Kanev at the party’s event on Sunday. Photo by BGNES

“The public outrage toppled Borisov and can bring down Stanishev too, paving the way for Borisov to return and then kick him out again,” Kostov said on Sunday, referring to the former prim minister Boyko Borisov and the Socialist leader, who formed the current cabinet.

“Any expectations that the street protests have the potential to provide a political solution doom them to failure.

The Protesters are citizens, not politicians. Even if the Electoral Code is changed, current MPs will find a way out and continue to rule.” Kostov added.

The long-time leader of the right-wing Democrats for Strong Bulgaria (DSB) party officially quit the political scene on Sunday, picking his former deputy Radan Kanev for his successor.

Following the poor performance of the party at the May 12 parliamentary elections, DSB leader and former Bulgarian Prime Minister Ivan Kostov, DSB Deputy Chair Radan Kanev and Petar Moskov announced that they were resigning.

DSB failed to pass the 4% threshold to enter Parliament.

On May 13, Kostov made clear that DSB's governing body would resign collectively on June 23 and the party's national council would elect a new leader and a new governing panel.

During the press conference, Kostov also noted that DSB saw no reason to challenge the election results, adding that the outcome of the May 12 vote did not spell an exit from the crisis for Bulgaria.

Kanev, in turn, suggested that Bulgarians with democratic beliefs had been left without representation in Parliament, which was an unheard-of situation.