Bulgarians Gear Up for 10th Day of Mass Anti-Govt Rallies 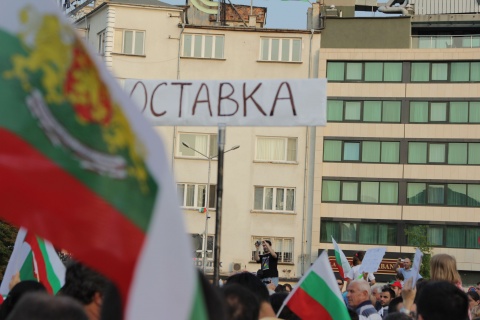 Protesters are calling for the resignation of new Bulgarian PM Plamen Oresharski, after a string of controversial appointments. Photo by Dimiter Muftieff

For the tenth day in a row, outraged Bulgarians will stage Sunday evening nationwide protest rallies against the Socialist-led government of Prime Minister Plamen Oresharski.

The massive demonstrations were sparked by the outrageous decision of the government to appoint shady media mogul and MP Delyan Peevski as Chair of the State Agency for National Security (DANS).

Bulgaria’s Parliament retracted the appointment of Peevski as head of DANS on Wednesday. The move however did not appease protesters, who are calling now for the government’s resignation following a string of controversial appointments.

The Oresharski cabinet was elected on the mandate of the Bulgarian Socialist Party, whose leader Sergey Stanishev also chairs the Party of European Socialists.

Saturday PES held their annual Council at the National Palace of Culture in Sofia, where several hundred ralliers had assembled to express their disaffection with Stanishev.

At the Council, PES decided to nominate European Parliament President Martin Schulz for their candidate for next European Commission President.

Stanishev was reported to be a favorite in the PES nomination, but he did not come to be named by the party Saturday.

However, PES expressed strong support for the efforts of the Bulgarian Socialists and the Oresharski cabinet in their efforts to overcome the political and economic crisis in Bulgaria.