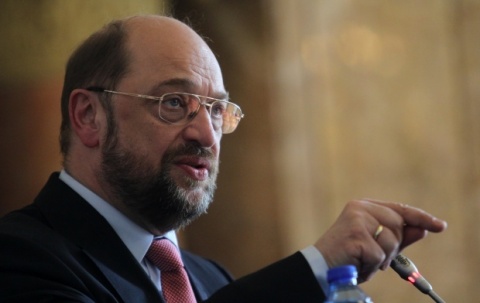 The President of the European Parliament, Martin Schulz, photo by EPA/BGNES

The nomination was announced Saturday by PES leader, Sergey Stanishev, who is also the leader of the Bulgarian Socialist Party, BSP.

The entire PES leadership is in the Bulgarian capital Sofia for a sitting of their Council.

"Martin Schulz is a true European; a person standing firm for our values, which express the real needs of the people. He is our strongest candidate now," Stanishev stated, returning earlier compliments extended to him by Schulz.

"You are leading your country and PES in extremely difficult times. One does not come often across leaders like you, so strong that they can publically admit they have made a mistake. This shows that you are not a close-minded person who believes that everything he does is the only right way. You are a person, who thinks and admits mistakes when you commit them. This is the difference between us and right-wing parties," the EP President told Stanishev before PES delegates.

Schulz warned the EU was under threat, adding the Socialists wanted to change the Union, which could be done only by the strong, united left wing.

The PES leadership is in Sofia at a time Stanishev is facing growing discontent from his own country people and party.

Bulgarian citizens are staging mass protest rallies for the 8th day in a row. They were sparked by the outrageous decision of the government and the Parliament to appoint controversial media mogul and lawmaker Delyan Peevski as Chair of the State Agency for National Security (DANS) with Stanishev seen as one of the masterminds behind the plan.

Demonstrators are demanding the resignation of the government of Prime Minister, Plamen Oresharski, elected on the mandate of the Socialist Party.

The PES sitting is held in the National Palace of Culture, NDK, in downtown Sofia with thousands protesting against the government and Stanishev outside.

Another rally is scheduled for 6:30 pm in Sofia. It starts on "Independence Square," between the buildings of the Presidential Administration and the Council of Ministries. Rallies will be held in other towns and cities as well.