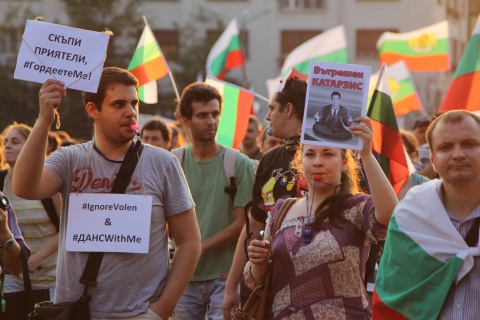 After seven days of street protests in Bulgaria, #ДАНСwithme has become the main hashtag – along with #ignoreVolen. Photo by Dimiter Muftieff

Bulgaria’s nationalist leader Volen Siderov is not fit to head the parliamentary body for corruption combat and should be dismissed, a respected political scientist argues.

"Unless the ruling Socialists and ethnic Turks dismiss Siderov, they will be held responsible for his anti-constitutional and anti-European behavior,” Ivan Krastev, a prominent Bulgarian political scientist and Chairman of Board of the Centre for Liberal Strategies, said in an interview for 24 Hours daily. “I am convinced that the last thing the Party of European Socialists expects its leader to do is lend credibility to the far-right xenophobic formations in Europe,”  Krastev added.

“Bulgaria’s current government is supported only by the party of Delyan Peevski and the party of Siderov,” he added, referring to the ethnic Turkish and nationalist parties.

“Everybody else are being held hostages. This is the reason why the government may not govern even if it stays in office.”

Earlier in the week MPs decided that Volen Siderov will head the parliamentary body for corruption combat, conflict of interests and ethics. Socialist leader Sergey Stanishev had hinted before at this development, saying that this post is the only thing Siderov wanted for his party.

"I see no reason why not to give that post to him,” Stanishev said, turning a blind eye to the nationalist controversial reputation and recent displays of arrogance.

Bulgaria's leaders have been for years the subject of humiliating criticism by the European Commission, worried about endemic corruption and links between organised crime and some bits of the governments.

Siderov’s election made analysts draw comparisons with the leader of another party, which entered the previous parliament campaigning against corruption, Order, Law and Justice.

Its leader, Yane Yanev, had a habit of producing classified information to back up his claims. That prompted accusations, which he denied, that he is a front for the secret services.