Bulgaria Standing on the Edge of Revolution? 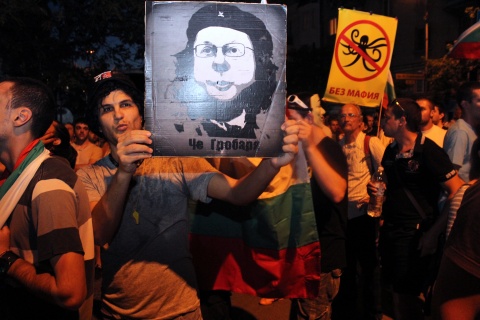 Bulgaria’s capital Sofia has seen over the last week unrelenting public outrage at the appointment of a media magnate to a top security post, which boiled over into protests against the new government. Photo by Sofia Photo Agency

Modern Bulgaria is going through tough times. The economy is stagnant, living standards are going down, and young people are leaving the country to find work and earn a decent wage. This is coupled with a political crisis that does not allow the country to develop in the right direction. Will the Bulgarians solve their problems?

In March of this year, the Bulgarian government has resigned. Prime Minister Boyko Borisov resigned after mass rallies in Sofia. What made peaceful Bulgarians take to the streets and join the strikes ongoing to this day? The reasons are trivial. Small wages, constant price increases and high level of unemployment. When the Greeks declared bankruptcy, the Bulgarians did not have an emotional reaction.

Bulgaria is a poor European country whose citizens are accustomed to survival. Bulgarians love their beautiful country and its national holidays. However, constant increases in food and energy prices are pushing people's limits. Bulgaria is still heated with wood. Central heating system exists only in major cities and only in specific areas. Apartments are heated with electric appliances, and villagers use stoves to heat their homes. A warm house in Bulgaria is considered a luxury that not everyone can afford.

There are barely any local products in stores, everything is imported. Meat comes from Germany, tomatoes from Turkey and Greece, garlic from China, potatoes from the Czech Republic. This happens in the country with the annual average of 320 days of sunshine and fertile soil. Bulgarian authorities consider local production unprofitable.

Many Bulgarians yearn for the days when the Soviet Union supplied oil and gas to Bulgaria, buying nearly all agricultural and many industrial products that were the republic's specialty. Then, Bulgaria lived well. People were paid stable wages, and tourism flourished.

Many Bulgarians used to be able to afford their own property. Land and real estate in Bulgaria were less costly than in other coastal countries. But the global crisis has changed the situation. Now the real estate business is almost non-existent, and there is no new construction. Factories and plants are either in disrepair or were sold to foreign companies for negligibly low prices. For example, Balkan Steel Plant was sold for a symbolic one dollar.

All this made people take to the streets. It started with small towns, but later the protests began gaining momentum. The country's authorities expected the rallies to have no consequences. Boyko Borisov was not interested in the opinion of the people as he was mostly concerned with Brussels' opinion.

When Romanians and Bulgarians were granted the official right to work in Western Europe, the European governments and people were horrified. Many Bulgarians rushed to other countries in search of a better life. This trend has become so widespread that, for instance, the Bulgarian health care system today lacks qualified specialists as they all have left to look for work in Western Europe.

The West is not thriving these days either, rather surviving the reduced wages, rising unemployment, and growing prices. For the Bulgarians this is better than nothing as the situation in Bulgaria is even worse. After Delian Peevski was appointed the head of the State National Security Service, thousands of anti-government rallies erupted in the country. 5,000 people gathered in Sofia to protest against the government. The protesters' posters read: "The people are not going to negotiate," "The new electoral law", "Mafia to jail." There are traditional slogans about "resignation" and "mafia". The rallies are peaceful and the protesters do not conflict with the police.

President Rosen Plevneliev invited representatives of the parliamentary parties to discuss the best ways of getting out of the political crisis. "My position is clear. I do not trust the government, but that does not mean I'm not willing to cooperate with it under my constitutional authority," said the president.

Economics and politics are two communicating vessels. Troubles in one sector automatically affect the other. The crisis in Bulgaria is of political nature, but the economic sector is in real danger. Until there is a new working government, the administration will work on autopilot.
Interim Government will not have the political support, and many of the ongoing projects will be frozen. Some analysts have expressed concerns about populist actions that may significantly affect the financial health of the country.

The Bulgarian economy faces serious risks, especially in terms of unreasonable costs. This may increase the debt and reduce the fiscal reserve, raise the interest rates on loans and lead to the loss of investors. Policy makers need to understand that by far the most important task is to maintain the financial stability of the state.

The question arises - is there a chance that Bulgaria's economy will fall into weightlessness as a result of the development of the political crisis in the country? Finance expert Emile Hirs believes that this should not happen because each company has its own management. The fact that the country is looking for a new form of government does not mean that individual economic actors would automatically inherit this feature. However, there is a risk because of the diverse demands of the protesters. The vast majority of these demands are not feasible.

Such important requirements as control of municipal and state property, as well as improvements to the business environment in the country are nonexistent. Some experts suggest taking loans for the economic recovery. Others believe that the idea to borrow money and then spend it on improvements of the situation in the country is equal to masking it under the guise of stimulating the economy. You can see what happened with Greece. Bulgaria would also have to pay for these loans.

In the context of an acute political crisis, business is concerned about the stability of the currency council and the currency. Every now and then concerns that the currency council will soon collapse and the lev will have to be devalued are heard in the country. However, nothing similar has happened yet. The Bulgarian National Bank has the gold reserve that represents a good financial cushion. Bankers also say that the political crisis has no direct effect on the banking system that faced far more serious problems in the past. However, they noted that the state bank vaults are directly dependent on the economy.

The policy makers have to sit down at the negotiating table to find a compromise and decide together how to get out of the difficult economic situation. If the political crisis persists, Bulgaria may be on the verge of a default. So far, things are moving along the classical revolutionary scheme. The political demands have replaced the economic ones, the authorities burdened by corruption and suspicions proved unable to cope with the crisis, and the people demonstrate reluctance to support government policies.