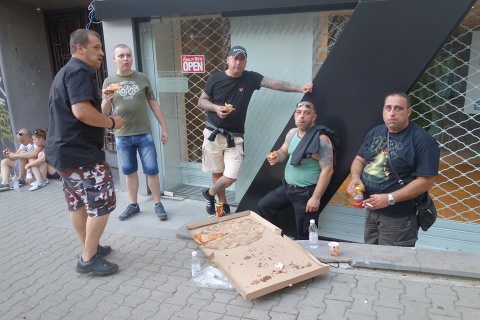 An investigative report of the Bulgarian National Television, BNT, aired Thursday evening, exposed the extremist nationalist party Ataka in paying people to protest in front of its headquarters.

Following a tipoff, the journalist went Tuesday as a common fitness buff to a gym in the Sofia "Ovcha Kupel" district, where he ended among a group of young people, who had been offered money to take part in some protest rally.

The recruiter, named Dany, whose regular job is a nightclub bouncer, introduced himself as one of the organizers. He made a list of those wishing to participate and explained to them that he was getting bonuses for each person he managed to recruit.

Dany listed the duties of the "fake" demonstrators as sitting on the sidewalk without doing anything, keeping quiet and not talking to any reporters, particularly about being paid.

The footage then showed Dany leading his group through side streets to Ataka headquarters, which are located inside the Opera house, where over 100 young people with big muscles have already gathered.

"Don't go with them; there are our buddies, but do not join them. Our group will sit here with me. You can play cards if you wish; do whatever you want to do," the recruiter is heard saying.

The journalist showed "Rakovska" street divided by a car, saying Siderov used it as tribune to deliver his speeches on a loudspeaker.

The group of the "undercover" reporter stood on the side for over four hours under Dany's careful watch. Around 10 pm, someone informed them that the peaceful rally was coming in their direction and all were prompted to stand up.

They stood waiting for about an hour, but as no one arrived, they were told to go home and that the taxi cab fare will be paid by the organizers, while their wage will be handed to them on the next day.

Journalist Tsvetkov went to the gym on the next day, but was sent back as he was told the new requirement was for men to weight over 95 kg. He declined getting his pay of BGN 30.

Siderov and his "supporters" managed to stir disturbances for two consecutive evenings at the beginning of the week, but were forced to bring an end to the "drama" as police beefed up presence around Ataka headquarters and the demonstrators decided to ignore the nationalists.

Thousands of Bulgarians are protesting for a week now with demands for the government to resign. The rallies were sparked by the outrageous decision to appoint controversial media mogul and lawmaker Delyan Peevski as Chair of the State Agency for National Security (DANS).

Meanwhile, bTV aired Friday morning an interview with a young man, who said he had worked for his entire life so far only as "paid" supporter, but had given up on the "job" recently and had decided to reveal his story before the camera. He stated many political parties were recruiting paid supporters all the time, but Ataka did it the most often, followed by the Bulgarian Socialist Party, BSP, with wages ranging from BGN 5 and a sandwich to BGN 50.

A photo story of the Sanctor Legum blog shows pictures of Siderov's supporters, eating pizzas and leaving piles of trash.

One of the comments in the forum reads the following:

"One of these half-humans on the picture, devouring the pizza, is a former Pleven prison guard, who was fired last year for illegal drugs trading inside the jail. Volen must be really strapped to count on such scum."

Meanwhile, the Opera house staff and director complained in media and on Facebook that the nationalists are a huge problem for them and that they prevent them from doing their jobs with the loud noise, the piles of trash, the difficult access to the building, and the men urinating on the street.

Rosen Tsvetkov's report (in Bulgarian) can be watched HERE.