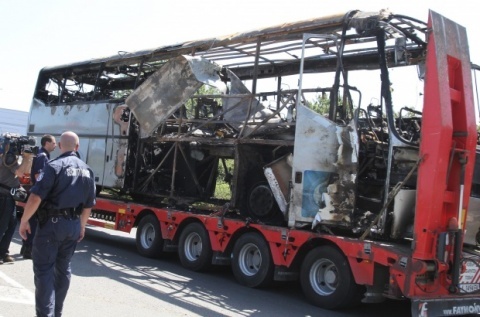 The Burgas bus bombing killed a total of five Israeli tourists, the Bulgarian bus driver, and the alleged perpetrator of the attack. Photo by BGNES

Bulgaria allegedly has previously undisclosed evidence linking Hezbollah to last year’s terror attack in the Black Sea city of Burgas, according to a news agency.

A Bulgarian representative to the European Union said Wednesday that investigators have discovered that a Hezbollah operative was the owner of a printer used to produce fake documents that facilitated the bus bombing in Burgas, according to the Jewish Telegraphic Agency.

JTA says the disclosure was made at a meeting of the CP931 working group. The group is charged with determining whether the European Union will blacklist Hezbollah as a terrorist organization.

“The Bulgarians put new evidence on the table during this meeting,” the diplomat said, as cited by JTA. “Their representative said the printer had been sold to someone from Hezbollah.”

In February 2013, Bulgaria’s then-Interior Minister Tsvetan Tsvetanov suggested that the evidence collected by the investigating authorities led to a "reasonable assumption" about the involvement of the Lebanese militant group in the terror attack at the Burgas airport.

Vigenin said on June 5 that "the evidence is not categorical" that Hezbollah planned the attack. International media then commented that the Balkan country had “backed away from charges” that the Shi'ite Muslim militant group had carried out the attack.