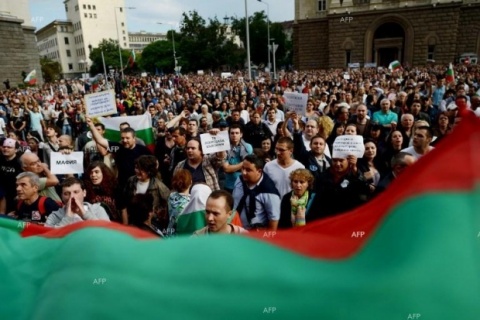 Bulgaria’s capital Sofia has seen over the last week unrelenting public outrage at the appointment of a media magnate to a top security post, which boiled over into protests against the new government. Photo by BGNES

For the sixth day in a row, thousands of outraged Bulgarians have staged nationwide protest rallies against the Socialist-led government of Prime Minister Plamen Oresharski.

On Wednesday evening some 10,000 protesters first gathered in front of the presidency building, chanting "Mafia!" and "Resignation!"

They were carrying posters, reading "Ignore media oligarchy", "No to mafia, oligarchs and monopolies," "New elections, but with new rules".

The massive demonstrations were sparked by the outrageous decision of the government to appoint shady media mogul and MP Delyan Peevski as Chair of the State Agency for National Security (DANS).

Over 7 000 protesters took to the streets in Sofia Tuesday, according to police. The rally went peacefully, despite attempts made by marginal nationalist groups to provoke protesters.

Earlier on Wednesday Bulgaria’s Parliament retracted the appointment of Peevski as head of DANS. The move however is unlikely to appease protesters, who have called for the government’s resignation.

The rally in Sofia is held under strong police presence with key buildings – of the presidential administration, the government and the parliament, surrounded by metal fences.