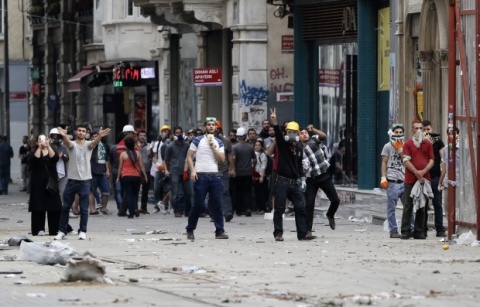 Turkish police carried out dozens of arrests of members of the "extreme left" early Tuesday morning as the anti-government protests continue to rock the country since the end of May.

The BGNES news agency reports that police have arrested around 90 members of the Socialist Party of the Oppressed (ESP) in their homes in Istanbul, citign the Bar of Istanbul.

ESP is a small formation which is active in the protests.

Law enforcement officers raided the building of the close to the party daily newspaper "Attila" and of the news agency Etkin, NTV, CNN-Turk reported.

Member of the Parliament S?rr? Sureyya Onder confirmed on twitter that ESP Vice President Alp Altinors was arrested at his home.

30 people were also arrested in the capital Ankara, 13 were arrested in Eskishehir and there were police operations in 18 other provinces, NTV informs.

A police source confirmed the operation and said: "For now, only provocateurs will be taken for questioning."

Turkish police have already arrested nearly 600 people in Istanbul and Ankara on anti-government protests on Sunday, bar associations in both cities report. According to Turkish law, detainees can be held in custody for four days and after that they must be given to the prosecutor to decide whether they should be charged, held in custody, or released.

Meanwhile, the Turkish Ministry of Justice began working on a project for the regulation of Internet crime. This project started in order to limit the role of social media in propagating the calls for protests against Prime Minister Recep Tayyip Erdogan, Turkish newspaper "Hurriyet" writes, citing a government source.

"We are estimating what the practice on this issue is abroad," the source told the daily.

About 25 people were arrested in Izmir for posting "false and defamatory information" about the protests in early June. Afterwards they were released.

Protests have erupted in cities across the country, as people oppose Prime Minister Tayyip Erdogan's leadership.

Erdogan has struck a defiant tone in the face of the biggest public challenge to his 10-year rule, during which he has overseen an economic boom and enjoyed broad popularity.

At a speech on Sunday before hundreds of thousands of supporters in Istanbul he said that "terrorists" caused the disturbances.

Ankara's police anti-terror department said it had no information on the reports of Tuesday's raids, News Daily reported.