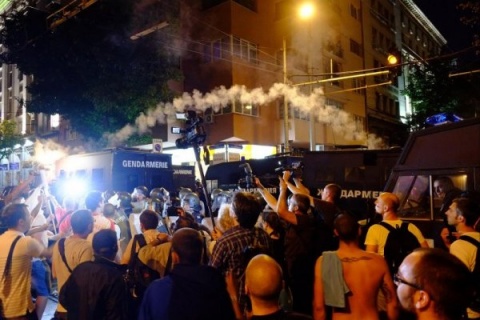 Extremist nationalists' clashes happened in two consecutive evenings in the Bulgarian capital Sofia in the aftermath of peaceful anti-government rallies. Photo by Bulfoto

The end of the fourth day of protest rallies in the Bulgarian capital Sofia against the Cabinet of Prime Minister, Plamen Oresharski, was marred by clashes between extremist nationalist groups.

After a very peaceful evening, tensions escalated once again in front of the headquarters of the far-right nationalist Ataka party, growing to a battle with throwing bottles, some filled with stones and sand, and rocks.

As 7 000 people, who attended the rally sparked by the outrageous decision of the government to appoint controversial media mogul and lawmaker Delyan Peevski as Chair of the State Agency for National Security (DANS), were beginning to disperse, around 10 pm some of the demonstrators reached the Ataka building in downtown Sofia.

They were met by barricades erected as early as 7 pm by party supporters who threatened earlier they will not allow anyone in the area.

The demonstrators, about 200-300 people dressed in black, who are said to be disgruntled former supporters of Ataka, started hissing its leader, Volen Siderov, shouting "national traitor," "you are Turks," "janissaries," and even obscenities. His followers remained silent for a while, just waiving the national colors.

Surrounded by supporters and most of his MPs, and guarded by makeshift shields from plastic garden table tops, Siderov took a loudspeaker and attempted to talk to the demonstrators, but was booed by them and applauded by those around him.

Some media quote protesters in saying some of the said followers were paid bodyguards and others have been bused from other parts of Bulgaria. In addition to the black clothes, some were wearing black masks as well.

Siderov denies provoking the clashes and says he was praying for the lost souls of those attacking him. This, however, did not prevent him from screaming "hooligans," and other insults at them.

According to 24 Chassa (24 Hours) daily, 8 people have been injured. Other media report between 2 and 7 injured, including one riot policeman, and one Ataka Member of the Parliament. The Bulfoto agency informs Tuesday morning that one of their reporters has been hurt in the melee.

There was strong police presence in the area the entire night.

Demonstrations were also held in front of the buildings of the Bulgarian Socialist Party, BSP, the predominantly ethnic Turkish party Movement for Rights and Freedoms, DPS, and the Citizens for European Development of Bulgaria party, GERB, but they were peaceful and no incidents have been reported there.

In a phone call interview for bTV Tuesday morning, Interior Minister Tsvetlin Yovchev could not forecast the outcome of the nationalist clashes, which happened in two consecutive evenings, but vowed the police will secure public order.

He declined commenting on Siderov's behavior, only agreeing the protests were largely peaceful, except some isolated incidents and violence. Yovchev did not confirm reports of injured policemen either.

The Sofia City Hall stated Siderov did not have a permit to organize a rally, and everyone who was near the Ataka headquarters Monday into Tuesday has been breaching the law as after 22:30 noise and protests are banned and violations call for sanctions.

Siderov claims he had a permit, in addition to "being at home," which allowed him to do there whatever he wanted.