Bulgaria's Sofia-Bozhurishte Economic Zone to Create Up to 5000 Jobs 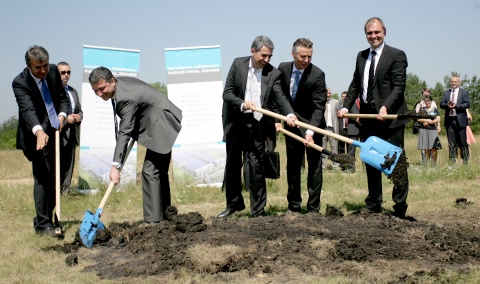 The ceremony to mark the turning of the first sod of the Economic Zone "Sofia - Bozhurishte" took place on Monday. Photo by BGNES

Valeri Andreev, CEO of the National Company "Industrial Zones", has suggested that the Economic Zone "Sofia - Bozhurishte" project will create 3000-5000 new jobs over the next five years.

The ceremony to mark the turning of the first sod of the Economic Zone "Sofia - Bozhurishte" on Monday is to be attended by Bulgarian President Rosen Plevneliev, Economy and Energy Minister Dragomir Stoynev, Sofia Mayor Yordanka Fandakova and the Mayor of the western town of Bozhurishte, Asparuh Asaruhov.

In a Monday interview for the BGNES news agency, Andreev made clear that the Economic Zone "Sofia - Bozhurishte" was a large-scale project spanning around 3 000 ha, adding that the first goal was to build the infrastructure.

"We expect that this zone will prove attractive to Bulgarians and foreign companies so that they can focus on the implementation of their own projects," he added.

"Today we shall present the first company, German Behr-Hella-Thermocontrol GmbH (BHTC). It operates in the hi-tech automotive sector. The managers of the companies evaluated the situation and their building is to be ready over the next six months, and over the next year they intend to start manufacturing automotive air-conditioning control systems," Andreev explained.

The CEO of the National Company "Industrial Zones" made clear that the company wanted to buy a 70 000 sq m plot in the economic zone, adding that talks were underway with representatives of 10 Bulgarian companies and a number of foreign firms which had expressed interest in the project.

Anreev pointed out that the Economic Zone "Sofia - Bozhurishte" was the biggest of a total of eight similar projects which were being developed in the country.