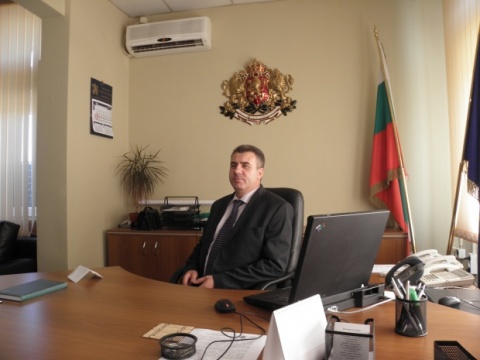 The protest in Bulgaria's southwestern city of Blagoevgrad led to clashes with the police, after newly appointed regional governor tried to enter the building of the District Municipality.

Musa Palev from the liberal ethnic Turkish party Movement for Rights and Freedom (DPS) is now Regional Governor of Blagoevgrad.

The new governor of Blagoevgrad entered his office at 9:12 am on June 17, guarded by 15-meter-long police cordon. The crowd was shouting "Resignation!" and "Down with the DPS!" and was singing the national anthem. A chain was put in front of the entrance of the municipal building to hold the protesters.

A group of policemen led the governor ahead, while the crowd tossed, kicked and booed at him. Palev defended himself with arms raised above his head, escaped and ran into the building of the regional administration.

Around 10 people had pitched a tent camp on Sunday in front of the Municipality. Monday morning a number of citizens joined them to protest against the appointment of Palev for governor.

The people were also shouting against the government of the Prime Minister Plamen Oresharski on the mandate of the Bulgarian Socialist Party (BSP.)

Around 100 people protested Monday, the Focus news agency reported. There were mostly supporters of the nationalist party VMRO. The organizers of the protest, Lyudmila Manova and Hristina Yadkova were there as well. All protesters agreed that having a DPS representative for a governor of Blagoevgrad was unacceptable.

Interim governor Biser Mihaylov welcomed Musa Palev in his office. He read the decision of the Council of Ministers and wished him no disasters, accidents and catastrophes during his term in office.

"I have not broken any Bulgarian law and I am sorry to step in my office this way," Palev said. The new governor of Blagoevgrad ended his speech with the words "The chair is hot."

He was firm he was not going to resign as people had nothing against him, except his ethnicity.

"Musa Palev will not last and will resign today or tomorrow. He is doomed because he is imposed upon people," is the official position of the conservative marginal Order, Law and Justice (RZS) party.

"Fear will prevent him from showing up in District Administration. He was always anonymous and will remain so," the RZS statement reads.

"Palev is voiceless to the extent to which he cannot realize that this is not a spoon to his mouth," is the position of RZS and its leader Yane Yanev.