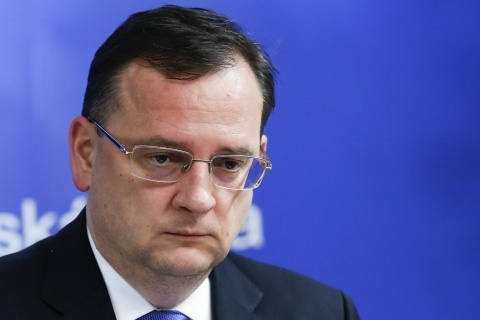 Czech Prime Minister Petr Necas is resigning in the aftermath of the huge corruption scandal in his country. Photo by EPA/BGNES

Czech Prime Minister Petr Necas has stated he was going to resign in the aftermath of the huge corruption scandal in the country, involving people close to him.

"I will resign Monday as I am fully aware of my political responsibility," Necas told journalists after holding talks and negotiations with his coalition partners in the center-right Cabinet.

He announced the entire Cabinet was going to resign as well, but explained the ruling coalition will try to form a new government led by someone nominated by his Civic Democratic Party (ODS).

Pressure had been growing on Necas to quit since prosecutors on Friday charged his Chief of Staff Jana Nagyova with corruption and abuse of power.

Two former MPs, an ex-minister and the current and former heads of military intelligence have also been detained.

All except one have been remanded in custody.

President Milos Zeman is quoted in saying by the BBC that the charges, brought after armed police raids on government and private offices on Wednesday, were "serious."

According to the investigation, Nagyova is suspected of bribing the former MPs with offers of posts in state-owned firms. It is alleged this was in exchange for them giving up their parliamentary seats.

Nagyova, who has been a very close associate of Necas for nearly a decade, is also suspected of illegally ordering military intelligence to spy on three people.

Czech media reported that the targets included Necas's wife, Radka Necasova. The PM announced this week that they were divorcing.

Despite the decision to resign, Necas continues to reject all the accusations against Nagyova and the other five.