Police Clash with Protesters in Istanbul as Gezi Park Cleared 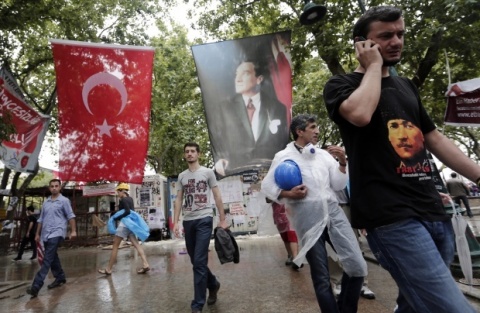 The protesters had refused to leave Gezi Park in the centre of Istanbul that is slated to be replaced by a shopping mall. Photo by EPA/BGNES

Protesters have clashed with Turkish police in Istanbul, after riot squads used tear gas and water cannon to eject demonstrators from Gezi Park.

The protesters quickly fled the park, but later erected barricades across nearby streets and lit bonfires.

Witnesses said it was one of the worst nights of unrest since the park was occupied 18 days ago, according to the BBC.

Thousands of people also took to the streets of the capital, Ankara, to express support for the protests.

The protesters had refused to leave Gezi Park in the centre of Istanbul that is slated to be replaced by a shopping mall.

The protests began on May 28 spread quickly, engulfing a number of major cities.

The rallies eventually turned into demonstrations against the authoritarian and Islamic-leaning policy of the Turkish government and of Prime Minister Recep Tayyip Erdogan.

The police crackdown on protesters in Istanbul, Ankara, and other towns and cities has drawn international concern, especially from Europe.